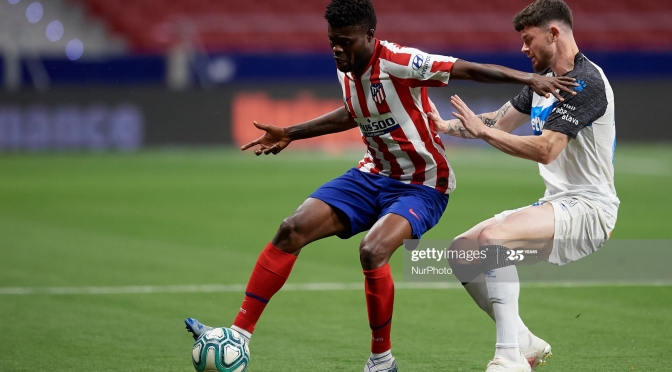 Over the last few years, many people have been in agreement of what Arsenal are missing from their team.

They lack the players who can beat an opponent in a one-on-one situation, they lack good defenders and they lack steel and quality in midfield.

That makes reports of the club intensifying their pursuit of Atletico Madrid’ Thomas Partey all the more exciting for Gunners’ fans. According to David Ornstein of The Athletic, Arsenal have stepped up their interest in the Ghanaian defensive midfielder as they look at a potential summer move.

Partey, 27, has been a mainstay in Diego Simeone’s midfield this season and has become one of the best defensive minded midfielders on the continent with his displays over the last two years. With excellent vision and reading of the game, he has made the central midfield role his own at the Wanda Metropolitano Stadium, which has seen Koke and Saul Niguez often moved out wide to accommodate him.

With excellent stamina and strong tackling skills, Partey is usually involved in the full game and is already physically astute enough for the Premier League. He is exactly what Arsenal need in their midfield on paper.

With the profile of player, Partey would be an excellent signing for a number of top European clubs. Manchester United, Chelsea, Manchester City and Barcelona could all use a top defensive midfielder being added to their ranks and all arguably are more enticing prospects for his career than the North London side. So why would he take that deal?

Firstly, they may be the only ones in for him. Partey has only been linked with Arsenal and Manchester United really, and even the links to the Red Devils have been minimal. Arsenal seem to be the only side showing a strong interest and that could have a big say on Partey’s movement.

While he has a release clause of just €50 million, Ornstein has suggested that Arsenal would need to lower that number if they were to secure the deal.

Partey is said to be keen on a move to the Emirates, with the fact he supported the club as a child in Ghana likely to be a big reason why. Partey will have grown up as a young footballer watching the likes of Patrick Vieira and Gilberto Silva dominating the midfield in the Premier League and will likely want to re-live those glory days.

He’d also be guaranteed all the minutes he wanted. He’d walk into the side as the best midfielder among their ranks, likely displacing Matteo Guendouzi who has fallen out of favour with Mikel Arteta. Premier League money would also mean a big pay-rise, although by the looks of things he’d be sacrificing any form of European football for at least one year.

There is always the chance that Partey signs a new deal with Atletico too. As stated already, he’s currently first-choice and has become almost undroppable in the last two years for Simeone. With two years left on his deal, he’s due a renewal now and Atletico will be keen to at the bare minimum raise his release clause to get closer to market value for a top player.

Most reports suggest that Partey is happy in Madrid and Madrid are happy with the player, so a renewal is more than possible. It could come down to just how much he wants a dream move to England, or whether Atletico act quickly enough to stop someone activating his release clause.

8 thoughts on “Thomas Partey A Game Changing Target for Arsenal”