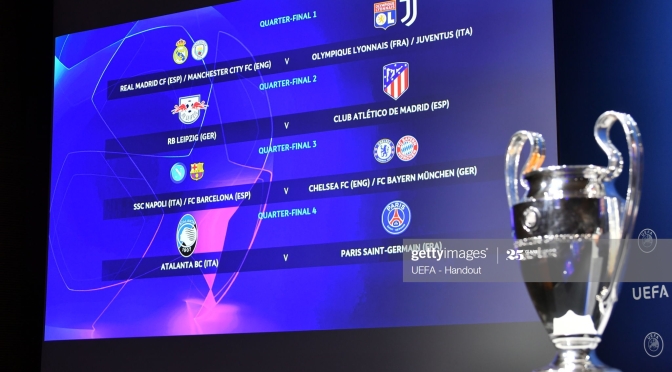 After Covid-19 put a big wall in the path of Europe’s elite clubs, UEFA finally were able to make the draw for the upcoming quarter-finals and semi-finals of this year’s tournament.

UEFA announced last month that the tournament would be completed in the month of August with a new format, including straight knockout ties from the quarter-finals onwards with all games being played in Portugal. All games with a second leg still to be played would be completed behind closed doors.

With that done, the draw was made on Friday afternoon to determine the brackets of the rest of the tournament and it threw up some intriguing ties.

Manchester City currently hold a 2-1 lead going into their home leg against Real Madrid, thanks to goals from Gabriel Jesus and Kevin De Bruyne. Sergio Ramos was sent off for Zinedine Zidane’s side and will miss the second leg but both sides form following the restart of football has certainly given Madrid more of a chance than they had pre-lockdown. Guardiola’s men have their full focus on the Champions League after being dethroned already by Liverpool in the Premier League, with City now prioritising a first European trophy. Even without Sergio Aguero, the form of their attackers should be enough to see of Madrid even though they’ll be bouncing after likely regaining La Liga from Barcelona by the time this game happens.

Juventus and Lyon battled each other in the first leg but it was the French side who came away with a shock win thanks to Lucas Tousart’s first-half strike. Juventus’ form in this season’s competition hasn’t been fantastic but with Cristiano Ronaldo in the best form of his Juventus career post lockdown, the Serie A leaders are expected to progress following their home leg. With the French league cancelled rather than paused, this game in August will be Lyon’s first competitive fixture in four months, which will most certainly be an issue for them.

Napoli and Barcelona took each other on in Naples and neither side could find a way to get clear of the opposition, with the game ending in a 1-1 draw. Dries Mertens scored a fine goal on the half hour mark, bending the ball from the edge of the box into the top corner before Antoine Griezmann equalised in the second half after a fine passing sequence allowed Nelson Semedo to square the ball for the Frenchman to tap in. Arturo Vidal was sent off late on and will miss the second leg, but Barcelona should have enough about them in attack at the Camp Nou to put this game beyond Gennaro Gattuso’s side.

I expect they will take on Bayern Munich in the quarter-finals, who will go into the second leg in Munich with a 3-0 lead from Stamford Bridge. Fresh off winning the Bundesliga and German Cup, Bayern are among the favourites for this competition and will likely be able to rest a few players in their second leg against Chelsea before they take part in the quarter-final clash.

In the already decided quarter finals, Timo Werner-less RB Leipzig will take on Atletico Madrid, who knocked out holders Liverpool in the last round with an extra-time win at Anfield. Italian newcomers Atalanta will take on French powerhouse Paris Saint-Germain in the final quarter-final clash in a game that is likely to be full of goals.

Those results would see Manchester City take on Juventus in the last 8 in a game that will likely be decided by the odd goal. Guardiola and Sarri both like to try and have the majority of possession but City’s midfield is just too strong for Juventus’. The form of Cristiano Ronaldo and Paulo Dybala will undoubtedly cause Pep’s side problems, while Matthijs De Ligt has arguably been Juventus’ best player since the turn of the year. In a one-off tie, Juventus will have to push forward more than they want to and with no fans, City’s quality should shine through and take them into the semi-finals.

Barcelona will likely come into this game having missed out on the La Liga title and after battling through a tough game with Napoli. Their squad is small and the amount of games in a small period of time won’t help them when coming up against Bayern Munich. The German side will be well rested following the end of their domestic campaign and will have some rhythm back after completing their tie against Chelsea. With Robert Lewandowski having his greatest goalscoring season ever and boosted by Thomas Muller, Serge Gnabry and Thiago Alcantara all having excellent seasons I expect the Bavarian side to progress quite comfortably. While there is every chance that Lionel Messi just decides that he wants to be in the next round and becomes unplayable once again, Bayern as a unit are too much for this Barcelona side and should be able to play their way and get a result.

After Atletico Madrid beat Liverpool, a draw with RB Leipzig is something that Simeone’s side wouldn’t have been opposed too. A very similar style of high pressing and fast transitions is what Julian Nagelsmann likes his side to do, but they’ll be without top goalscorer Timo Werner following his departure to Chelsea. Without him, their biggest goalscoring threat is gone and Atletico’s form post-lockdown has been much better. They defend well as a unit and have found form going forward too. They should have more than enough to progress through, especially in a one-off game.

In the final quarter-final, free-scoring Atalanta make their debut at this stage of the competition against Thomas Tuchel’s PSG side. Neymar, Mbappe and co managed to overcome Borussia Dortmund in the last round thanks to a strong defensive performance in the second leg. Their quality going forward is undeniable but Atalanta are a wildcard. They seem to approach games with a “we’ll score more than you” attitude and it’s done them well in Serie A. They’ve scored the most goals in the league for the second season in a row and will fancy their chances against a PSG side who haven’t played competitively since March. Ultimately though, PSG’s quality should shine through. Going forward Icardi, Mbappe and Neymar are unrelenting and all capable of scoring or creating. Defensively they could absolutely be stronger but if there’s any team in Europe you don’t want to go goal-for-goal with it’s PSG.

That would make the semi-finals super tasty, with Manchester City taking on Bayern Munich and Atletico Madrid taking on Paris Saint-Germain. Lisbon will host these games and the final in August.

how close are man utd to competing for major honours?