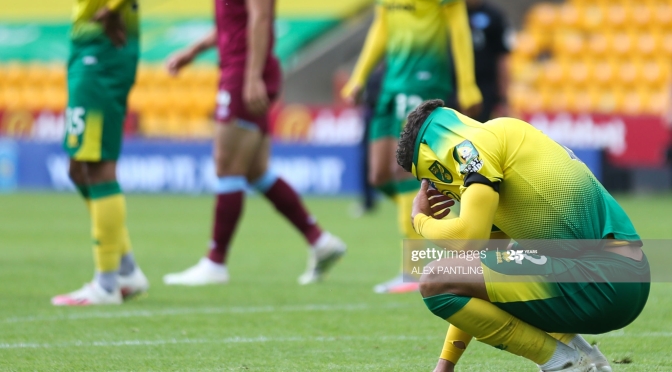 After relegation back to the Championship was confirmed, Norwich City now have to figure out a way back to the promised land.

A crushing defeat to West Ham saw the Canaries get sent back down at the first attempt, having accumulated just 21 points from their 35 games so far. They have won just five games all season and their top goalscorer Teemu Pukki hasn’t scored since January.

Despite the poor season, the club have shown they have some real talent in their squad. A few players have reportedly attracted interest from clubs that will be in the Premier League next season, while others have had no news reported on their futures.

Tim Krul has proven previously that he is a top division goalkeeper. His performances at Newcastle were good and now this season he has kept his side in games they had no right to be in at times. While the truth of the matter is that no top sides will take him, the lower end of the table could see a bargain in the Dutchman.

In defence, the players haven’t given the best representations of themselves. The full-backs Max Aarons and Jamal Lewis came into the league with big reputations as exciting, young, attacking full-backs. While they’ve lived up to that billing, defensively they’ve not been nearly good enough. They’re both young though and I wouldn’t be surprised to see a mid-table side take a punt on either of them. Jamal Lewis especially has impressed me this season and I wouldn’t be shocked if Leicester moved to bring him in as a replacement for Chelsea target Ben Chilwell.

In the heart of the defence, Ben Godfrey has done okay but he showed a lot of deficiencies in his game. Aerially he isn’t the best and his tackling needs a lot of work. He’s very comfortable on the ball though which could stand him in good stead in the future. Another year in the Championship won’t do him any harm at 22 years old and could be the catalyst for another push into the Premier League the following year.

The midfield and attack is where they’ve struggled most and it’s no surprise that I only see three more members of the squad potentially in the top league next season.

Todd Cantwell, Emiliano Buendia and Teemu Pukki have all shown quality in spurts that they belong in the division.

Cantwell is only 22 years old and has goals this season against Manchester City, Manchester United, Chelsea, Wolves and Arsenal. His general link play from the wing has been good and he’s adapted well to the physicality of the league. As a young Englishman, he will appeal to much of the league. Clubs such as Burnley, Crystal Palace and even Tottenham could do with a player of his profile and he will likely be available for a relatively low fee because of Covid-19. He has plenty of room to grow and develop more and the risk would be relatively low. Even if he was signed and didn’t perform well, due to his age and the current market you’d probably be able to sell him for a profit.

Pukki has shown that with service he knows how to find the back of the net. His 11 goals scored this season came mainly at the start of the campaign when Norwich were fearless and attacked everyone the same way. Naive? Maybe. But it showed his qualities. He’s suffered since Norwich adapted their style to try and be more defensive, resulting in his goal drought that has stretched since January now as of this writing. A club looking for goals would without a doubt be interested in him, so keep an eye on the likes of Sheffield United,Crystal Palace and Brighton who could show an interest.

Finally, the best of the bunch – Emiliano Buendia. The Argentine is only 23 years old and has been one of the better playmakers in the league this season. He has accumulated 7 assists in the league and created more chances than anyone else in the league not named Kevin De Bruyne, Jack Grealish or Trent Alexander-Arnold. His ability to beat a man and to retain possession in tight spaces mean he’d be an asset to the top sides in the division as an option for depth. Chelsea are reportedly interested in Said Benrahma from Brentford and Buendia would be an excellent alternative. Spurs and Arsenal could also do a lot worse than bringing him into their sides, with evidence suggesting his numbers would only get better in a team where he is surrounded by more quality.

Norwich will of course look to hold on to as many people as they can in the hope that they can bounce straight back. The likelihood of that though, is very low and the big boys will be circling for a bargain.

how should man city spend their £150m transfer budget?

2 thoughts on “Norwich City: Which Players Deserve To Stay In The Premier League?”