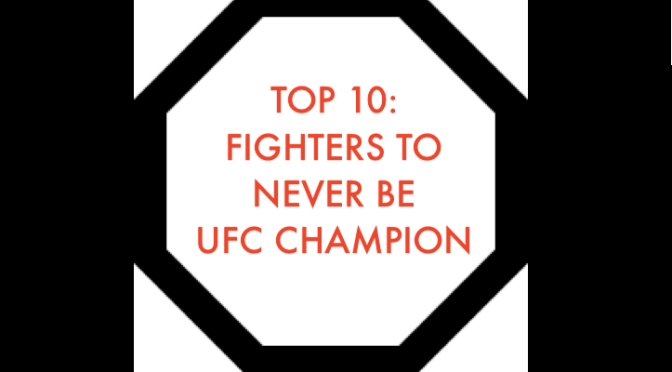 So.. BT Sport caused a bit of a fuss, didn’t they?

Following on from the midweek Fight Island card, BT Sport compiled a list from each of their analysts of the best fighters to never win a UFC title. They discounted interim titles, which opened the door for several fighters but their picks caused backlash online.

British MMA legend Dan Hardy, who once fought Georges St-Pierre for the welterweight title included names such as Kenny Florian and Jon Fitch, while Adam Catterall had Dan Henderson as No.1 on his list.

After seeing these lists and seeing obvious names left out, I felt obliged to compile my own list.

The big Swede in his prime was one of the best light-heavyweights we’ve ever seen in the UFC. His elite level boxing saw him KO plenty of opponents, while he was also the first man to ever successfully complete a takedown against Jon Jones. Gustafsson got three shots at the title during his tenure but unfortunately for him came up against two of the best mixed martial artists of all time. He controversially lost to Jon Jones in his first title fight, with many describing that bout as the best UFC title fight ever. He then took on Daniel Cormier following Jones’ stripping of the belt and was outwrestled by an Olympian to a decision loss. He got a final chance against Jones again when Cormier relinquished the 205lbs belt after winning the heavyweight title, but was outclassed and beaten in a TKO loss. In any other generation without Jones and DC around, I’m confident Gustafsson would have reigned supreme for a long time at 205.

A kickboxing legend, Overeem holds the record for most professional fights on his record before receiving a UFC title shot. His only opportunity came against Stipe Miocic in 2016 in his 57th fight, and he was viciously KO’d in the first round. That doesn’t take away from a stunning resumé that has seen the Dutchman take out legends like Brock Lesnar, Fabricio Werdum, Junior Dos Santos, Mirko Cro Cop, Mark Hunt, Vitor Belfort and Frank Mir. He’s unlikely to ever get to the point of title recognition again now at the age of 40 but his career will go down as one of the best in MMA heavyweight history.

The flyweight legend has been around in the UFC since before the division’s inception back in 2012. He competed for the inaugral title, being beaten by Demetrious Johnson before building his way back up for a rematch just over a year later. He was beaten again by ‘Mighty Mouse’, this time by knockout. He went on a run of 9 wins in his next 10 fights before receiving a third title shot earlier this year, for the strap vacated by Henry Cejudo. A headbutt saw him get cut wide open against Deiveson Figuereido and then quickly knocked-out, meaning he is 0-3 in title fights for the Flyweight belt. He was the last man to defeat Henry Cejudo prior to ‘Triple C’ retiring and will get another chance this weekend on Fight Island to finally claim UFC gold. For now though, he ranks on this list.

A to Kamaru Usman at UFC 251 means ‘Gamebred’ still has a place on this list. Street Jesus has gained mainstream notoriety in the last year and a half following a crazy run of viral moments, but he has been around for 17 years now. His record in the UFC is very good and he has beaten plenty of world class fighters during his time in the company. He’s obviously most known for his flying knee finish of undefeated Ben Askren, while he has KO’d Donal Cerrone, Darren Till and Nate Diaz too. But his all-round skillset is definitely underrated. He showed his wrestling skill in the defeat to Usman where he stuffed several takedowns, while he also has a submission win over Michael Chiesa. Masvidal is among the best to never win a belt but is on a mission to change that in the near future. If he never succeeds though, he will without doubt be one of the best to never hold a UFC championship.

The Bantamweight king, who never held Bantamweight gold in the UFC. ‘The California Kid’ came to the UFC having been dominant in the WEC 135lbs division, where he held the title and dominated the division. When he switched allegiances after Zuffa purchased the company, he challenged Dominick Cruz for the Bantamweight title as the last man to beat Cruz. He was defeated via decision and when Cruz had to relinquish the title due to persistent injuries, it was Faber who stepped up. In the bout for the vacant title, he was once again beaten though – this time by Renan Barao. Cruz eventually returned and reclaimed his title, which set up a trilogy fight between himself and Faber and the founder of Team Alpha Male once again fell at the final hurdle. Despite never winning the gold, Faber is recognised as one of the best Bantamweight’s of all time and thus deserves his place on this list.

Maybe a left-field shout, but Mendes for me is in a similar position to Alexander Gustafsson. In his generation had it not been for the best of all time reigning supreme, Mendes would have almost certainly had at least one reign with the championship. His first fight with Jose Aldo came after an 11-0 start to his career but he was knocked out by a brutal knee to the face at the end of the first round. He worked hard and went on another 5 fight win streak to earn a rematch where he took Aldo the full distance in the Fight of the Year in 2014. In that bout, he was outclassed once again but it was at a time where Aldo was literally seen as unbeatable. He’s also remembered for his short-notice fight with Conor McGregor in which he was knocked-out in the second round. What many forget though is that Mendes dominated the first and second round before that KO and with a full fight-camp, it’s very possible we would have seen a different outcome in that fight and the whole Conor McGregor era would have ended before it ever began. Mendes tainted his legacy by failing a drugs test towards the end of his career but he should be remembered for being the best Featherweight to never hold the belt.

The Stockton gangster is far more remembered for his antics outside of the cage than inside of it, but that doesn’t depreciate his skill and ability. The older brother to Nate, Diaz won the Strikeforce and EliteXC welterweight titles before the UFC bought them out. He entered the UFC and beat BJ Penn, before losing to Carlos Condit for the interim welterweight title. He then lost to champion Georges St-Pierre in a title bout before his infamous no contest against Anderson Silva. That was his last fight in the company after USADA banned him for five years for marijuana use and it will always be a question of ‘what if’ for Nick Diaz. His record shows however that he is among the best to do it at welterweight and he can count himself mightily unlucky that he never got to be champion in the UFC at 170lbs.

Two divisions, one title shot and yet he’s never held the gold in the UFC. He started off in the featherweight division and amassed an impressive record of 8-3 at 145lbs before deciding to move up to lightweight. Since his step up in weight and competition, Poirier has lost just twice in 13 fights with impressive knockout wins over the likes of Eddie Alvarez and Justin Gaethje. He held the interim title belt after beating Max Holloway, but was submitted by Khabib Nurmagomedov in his only UFC title shot to date last September. He is the best pure boxer in the 155lbs division and has knockout power for days but his ground game is also underrated. 7 submission wins in his career prove that his ground game is up there with the best too and and in any other generation of fighters he’d likely be at the top of the mountain. He just happened to be around in the most stacked division of all time with some of the best fighters of all time. He has time to get there but it’s a tough ask so for now, he has to make do with a place on this list.

The Soldier of God. Yoel Romero. How has he never won a UFC title? The Cuban wrestling machine amassed a record of 8-0 when he entered the UFC including wins of Lyoto Machida, Jacare Souza and Chris Weidman. It led him to a UFC title shot against Robert Whittaker, where he lost via a unanimous decision in a close fought fight. He then fought Luke Rockhold for the interim belt, only to miss weight and be ineligible. That didn’t stop him knocking Rockhold out cold and earning a rematch with Whittaker later that year. He then missed weight for that bout too, meaning he was ineligible to win the belt even if he beat the New Zealander and he very nearly did. In another clash that went the full 25 minutes, many believe Romero won the fight where he knocked Whittaker down twice and caused plenty of problems. He had a third title shot against Israel Adesanya earlier this year but really fumbled his chance at the title when he basically refused to strike first, allowing Adesanya to throw leg kicks and get a decision win in one of the most underwhelming fights of both their careers. Romero is now 43 and after fluffing his chance against Adesanya will likely never get another chance to win the belt. A real shame for one of the best to do it at 185lbs.

Not only the best to never win the belt, but he’s never even had a shot at the undisputed belt in his career. ‘El Cucuy’ is one of the most feared fighters ever, dominating the 155lbs division ever since he joined the UFC back in 2011 by winning The Ultimate Fighter. After losing to Michael Johnson in 2012, Ferguson went on a 12-fight win streak, defeating the likes of Donal Cerrone, Edson Barboza, Gleison Tibau, Kevin Lee, Anthony Pettis and Rafael Dos Anjos. He won the interim title when he beat Lee, but never got his earned shot at the undisputed belt as he got injured during fight week. The rise of Conor McGregor didn’t help him, as the Irishman ventured outside of the UFC while being the champion. He continued to win though and was ready for his shot against Khabib Nurmagomedov before the Covid-19 pandemic struck and cancelled that arranged bout for a fifth time. He took on Justin Gaethje on short notice and lost by knockout, meaning he lost his title shot and undefeated streak in a bout he didn’t need to take. He now needs to rebuild to get back into title contention. Much like Dustin Poirier, he has time to do it but with the division as stacked as it is don’t bet against the two of them needing to fight each other on the way to a shot at the top of the mountain. A fearsome striker and dangerous grappler, Ferguson is one of the most complete fighters of all-time and it will be a tragedy if he never gets the opportunity to become undisputed lightweight champion.

Do you agree with my list? Let me know if you think I’ve missed anyone out too.