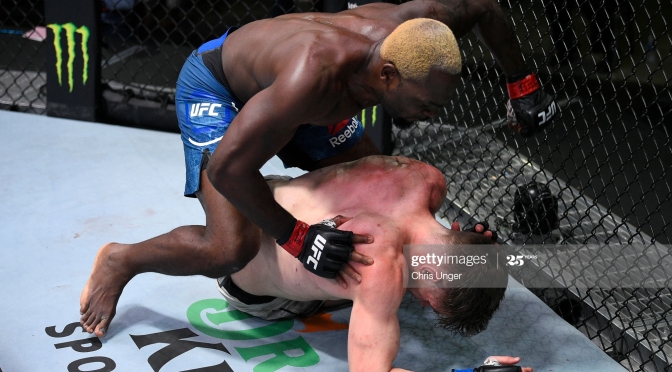 A bizarre fight card on Saturday night left us in little doubt that the UFC is stacked with talent as the three main fights on the night all showed the depth of the divisions currently.

At welterweight, Vicente Luque stopped Randy Brown in the second round with a beautiful knee against the cage while in the women’s flyweight division Jessica Maia defeated No.1 contender Joanne Calderwood with a first-round armbar to stake her own claim at a title shot.

All that came before Derek Brunson showed the world he is more than just a gatekeeper for 185lbs middleweight division when he outgrappled and knocked out Edmen Shahbazyan in the main-event to hand the young prospect the first defeat of his career.

All three performances stood out on the night for how comfortable they were. The latter two were both underdogs on the betting line going in, while Luque was expected to win via knockout just purely because of his style.

Luque himself called out Nate Diaz after the fight, believing himself to be due a big name again. After beating Mike Perry he was defeated by Stephen ‘Wonderboy’ Thompson before beating Niko Price a second time before this fight. Luque’s forward pressure and willingness to take a punch to give a punch is a fan friendly style but also effective, as his 17 finishes from 19 wins prove. A fight against Nate Diaz is unlikely, mainly because Diaz won’t fight for less than a big pay day these days and Luque doesn’t draw that kind of attention. It would be a fun fight though.

Diaz is so tough and durable that he would eat Luque’s best shots and his boxing is good enough that he’d be able to fire back some of his own. If the fight went to the ground, Diaz’s jiu-jitsu skills would likely give him a slight edge on the ground but Luque is not a slouch either. Overall, I like Luque’s chances in that bout but you’d be crazy to count Diaz out in a scrap.

Despite being told she was next in line for a title shot against Valentina Shevchenko, Joanne Calderwood decided to take a short-notice fight against Jennifer Maia to shake off any potential rust ahead of that fight. She didn’t bank on getting caught out by a jiu-jitsu black belt and forced to submit in the opening round due to armbar. Maia has now put herself at the front of the queue for a title shot at 125lbs, with both champion and UFC president Dana White acknowledging that she will be next to fight for the belt.

Middleweight looks evermore exciting now too following the result at the Apex. With Brunson’s win over Shahbazyan he moves to 3-0 in his last three bouts and surely puts him into the conversation among potential title candidates. With Israel Adesanya fighting Paulo Costa next month and Robert Whittaker fighting Jared Cannonier in October after his win over Darren Till last month, Brunson falls into the category just below that.

Jack Hermansson’s win over Kelvin Gastelum put him into a similar spot and could be a fun match-up. They’ve never fought before and a win for either of them could potentially set them up as the contender after the winner of Adesanya-Costa fights the winner of Whittaker-Cannonier. With Till, Gastelum, Shahbazyan himself and Yoel Romero still all active in the division too whoever is the champion at the end of 2021 will have certainly earned it the hard way.