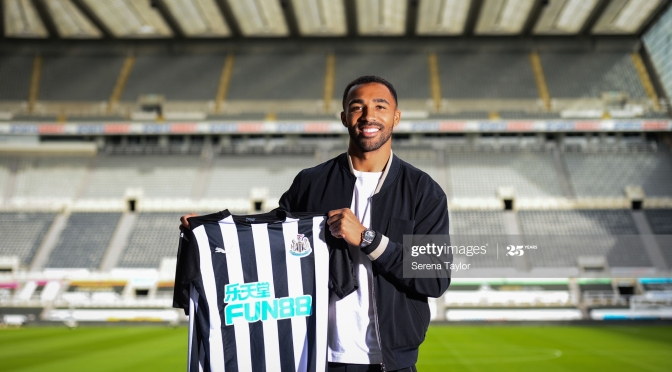 Newcastle United have completed the signing of Callum Wilson and handed him Joelinton’s No.9 shirt.

Wilson has signed from Bournemouth on a four-year deal after a £20million fee was agreed between the two clubs over the weekend. There was interest from Aston Villa too, but Wilson only had eyes for the Magipies.

After signing, it was announced that Wilson had already spoken with Newcastle legend Alan Shearer about playing for the club and it was revealed would wear the famous No.9 shirt. That shirt was worn last season by Brazilian forward Joelinton, who signed from Hoffenheim in a club-record £40million deal.

He struggled massively last year, scoring just four goals in 44 games in all competitions. That form was what made Steve Bruce feel like he needed a new striker, but taking the shirt away from him almost seems like a kick in the teeth.

Last season was a horrific one for Joelinton but lets use a bit of perspective. He isn’t an out-and-out striker, it was his first season in a new country and league. Newcastle’s top goalscorer in all competitions Miguel Almiron with 8, followed by Jonjo Shelvey with 6. Only those two players scored more than Joelinton, so clearly the system had a part to play in the poor reflection of the transfer.

With that said, Wilson is without a doubt a better player and more fitting of the legendary squad number. Last season Wilson scored 9 goals in all competitions but the previous season he scored 15. Wilson isn’t a sure-fire natural goalscorer by any stretch of the imagination but his link play, movement and willingness to run in-behind are far more well suited to the Premier League than Joelinton’s skillset.

It’s not been officially confirmed yet, but I’d hope the decision to take the shirt number off the young Brazilian and give it to Wilson was spoken about first – not like what Manchester United did with Anthony Martial and Zlatan Ibrahimovic way back when.

With the club also confirming the signing of Ryan Fraser, the two will link-up once again following their time at Bournemouth. Joelinton will need to remake his career at the club in a different position, or face leaving after just 12 months with more failures than success’ to his name.