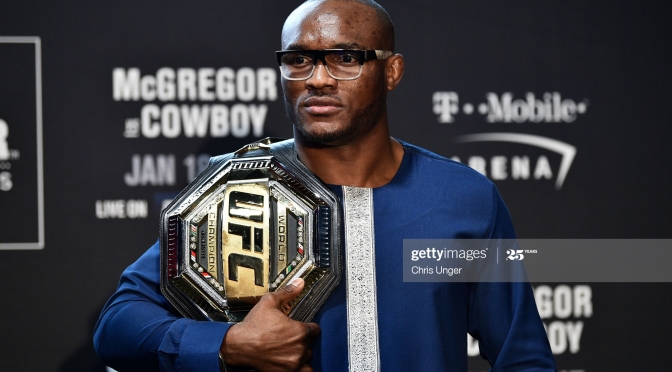 2020 has been a wild year for MMA. New champions, cancelled fights, new signings and some of the best fights have all happened despite the coronavirus wreaking havoc all over the world.

The welterweight division is one of the weight classes that hasn’t been held hostage this year, as we’ve seen grudge matches, title fights and new contenders come to the fore so far. But right now there are decisions to be made about who should fight who. I’ve decided to do Sean Shelby’s job for him and string together my match ups for the 170lbs division going forward.

First up is the title. It’s already a done deal that Kamaru Usman will take on Gilbert Burns for the strap at UFC 256 in December so we’re going to leave that alone. After that it gets tricky though.

For me, next up has to be Colby Covington against Jorge Masvidal. The two most recent unsuccessful title challengers have a very real beef and are arguably two of the best in the world right now. Masvidal is a lethal striker with a very polished ground game, while Covington showed against Tyron Woodley that he pushes the pace better than anyone bar the champ and has a phenomenal ability to ground an opponent while leathering them with strikes. A fight between the two could set up the next title contender for the winner of Usman vs Burns, with Masvidal’s short notice fight not giving him a true opportunity to prepare his title fight while a win for Colby would mean two in a row against top opposition since his defeat.

Leon Edwards is another who deserves to be in the title picture at 170lbs, having won 8 in a row in the division and beating the likes of Donald Cerrone, Rafael Dos Anjos and Gunnar Nelson. One thing he is missing from his resume though, is a really big name to make the casual fans stand up and take notice. He was supposed to fight against Tyron Woodley back in March but UFC London was cancelled due to the COVID-19 pandemic and he’s not been able to secure a bout since. While he could fight either of the two aforementioned fighters and it would make complete sense, I think he should fight Nate Diaz.

With Diaz pushing for a fight with Masvidal in a BMF title rematch for January, Dana White has admitted that he would prefer for Masvidal to fight Colby. With the way Diaz was dominated in the first fight, a rematch would make little sense other than for financial purposes. If Edwards takes on Diaz, it allows the Englishman to get a huge name on his CV and a win ultimately seals a title shot for him. Should Diaz win the fight, it pushes him further into the money fights he craves so much too.

Slightly further down the pecking order Stephen ‘Wonderboy’ Thompson has been linked with a fight against the newest sensation in MMA, Khamzat Chimaev. Personally, I think it’s too early for Chimaev to be getting Top 5 ranked opponents. He has absolutely dismantled all three of his opponents in the UFC so far but none of them have been ranked yet. To watch him jump some of the talent that have worked so hard to get into the Top 10, never mind the Top 5, would be unfair and just cruel.

For this reason, I’d pit ‘Wonderboy’ against Neil Magny. Magny is on a great run at the moment, having won his last three in a row including a destruction of former champion Robbie Lawler last time out. These two have been around for a while now and with Magny in particular, he’s deserving of a push towards the title picture. A bout with ‘Wonderboy’ would see both men get recognition as being among the best welterweights in the world but would correctly reflect their status as needing a few more wins before getting there.

As for Khamzat Chimaev, make the bout against Demian Maia. It’s the one he asked for originally and Maia is seemingly down to do it, so make it happen. Chimaev gets a ranked opponent who is comfortable on the ground and will give him the chance to use his kickboxing skills again, while also gives him a big name to add to his CV before entering the top 5 of the division.

Right now 170lbs is among the best divisions in the whole organisation and with so many top fighters ready to make the step up into title contention, 2021 could be the biggest and best year for the weight class in a very long time.

4 thoughts on “Match-Making The UFC Welterweight Division for 2021”