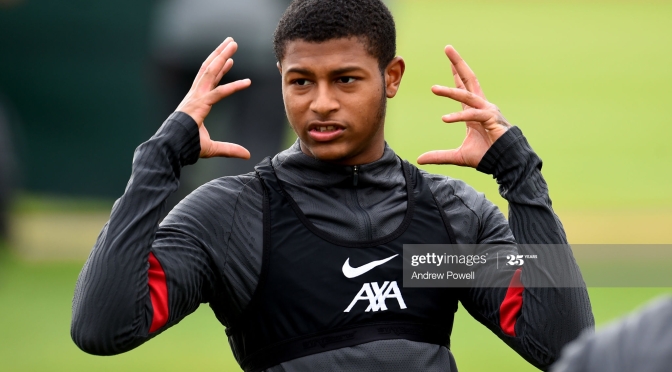 Sheffield United have completed the signing of Rhian Brewster from Liverpool, with the selling club potentially able to claim deal of the summer for incomings and outgoings now.

The England youth international was set to leave the club on loan earlier this summer, with several Premier League clubs interested. However as Liverpool signed Diogo Jota in attack for a fee rising to £51million, the club opted to put Brewster up for sale – so long as a buy-back option was included in the deal.

Crystal Palace and Aston Villa were interested in making a deal happen but ultimately it was Sheffield United who struck a deal for the player. The Blades will pay a club-record £23.5million for the striker, with Liverpool retaining a 15% sell-on clause and a buy-back option for an undisclosed amount valid for three years.

In a similar way that Real Madrid have done with Sergio Reguilon, they’ve essentially let a top prospect go on a long-term loan deal to balance their books now but retaining control of the player’s future going forward.

With Mane, Salah, Firmino, Minamino and Jota ahead of him in the pecking order, a move for regular football is exactly what Brewster needs at this point in his career. He proved during his mid-season loan to Swansea last season that with regular football he’s a goal threat, scoring more goals than any other player in the Championship during his time in the division.

At just 20 years old, Brewster is a top talent in the English game. But he’s not ready for the top end of the Premier League on a regular basis yet. Sheffield United have struggled for goals this season, failing to score a goal in any of their three games so far this season.

The addition of Brewster to the attack will add some dynamism to an otherwise quite static attack, but also adds a sure-fire goalscorer. Inside the penalty area, Brewster comes alive and with the way that Sheffield United play he should receive plenty of chances across the season. He will also be able to focus solely on scoring goals, with the likelihood that he’ll be paired with a partner who’s priority is to link the play from the midfield.

It’s a deal that Liverpool simply can’t lose on. They’ve sold a player with barely any first-team experience who can’t get into their first-team for £23.5million, while also pre-agreeing a price for a buy-back option should he perform as they expect him too. Bringing him back at any point in the next three years allows them to always have an option in the market to improve their frontline.

It also gives them the option to make money off any future sale should they decide not to bring him back using their buy-back clause. They could also do what Real Madrid and Barcelona tend to do if a club comes in and offers a fee above their buy-back clause to Sheffield United. With their buy-back option they can bring Brewster back to the club but then sell him on to whoever the interested club was to make even more money off the deal.

After securing the signing of Thiago for just €30million, they’ve now made the sale of the season too. Liverpool are the bar when it comes to the transfer market this summer.

2 thoughts on “Rhian Brewster to Sheffield United – Deal Of The Summer?”