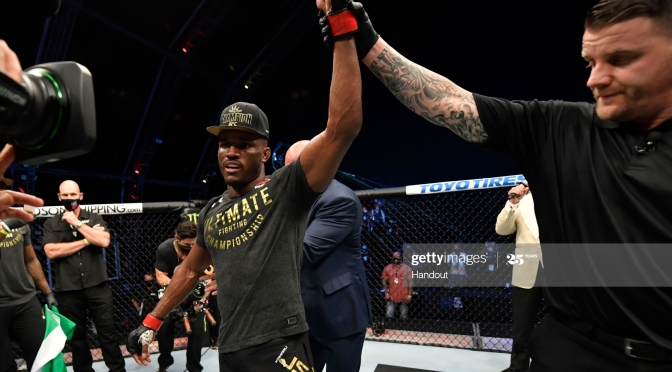 The UFC’s end of year pay-per-view schedule needs rearranging as two of the four co-main events have fallen apart.

It’s been revealed now however that both Cody Garbrandt and Kamaru Usman have had to withdraw from their scheduled bouts due to injury and the UFC have confirmed the fights won’t be happening.

Figueiredo’s first title defence will now be against Alex Perez at UFC 255, with the 28 year old stepping in to take Garbrandt’s place. He is currently ranked at No.4 in the UFC flyweight rankings, with his last win coming at UFC 250 with a TKO win over Jussier Formiga. Joseph Benavidez is currently ranked at #1 but he’s been beaten and battered by Figueiredo in both of his last fights. Below him #2 Brandon Moreno is already scheduled to fight Brandon Royval at UFC 255 while Askar Askarov isn’t scheduled to fight anyone currently.

It’s weird that it’s Perez who’s been given the nod for the fight, but it should still be a fun bout with both men fairly explosive and durable. Perez is more of a ground fighter than he is stand up though and with Figueiredo’s heavy hands and jiu-jitsu black belt, I expect he’ll still be able to come out on top.

As for UFC 266, nothing has been announced yet in terms of a new main event. Leon Edwards has offered to step in for Usman against Gilbert Burns in a No.1 contender fight, while Aljamain Sterling has called out bantamweight champion Petr Yan for a bout in December too. Another option, while unlikely could be Conor McGregor’s return against Dustin Poirier. Both fighters agreed online to an ‘exhibition match’ for charity in December, before Dana White confirmed he had offered both guys the bout on their UFC contracts and was waiting for a reply.

According to Ariel Helwani, the UFC have tentatively spoken about making Stipe Miocic vs Francis Ngannou but it is ‘a long shot’, while they could also try to make Colby Covington vs Jorge Masvidal although it’s not close to being done.

There are plenty of options for the UFC for them to add a big fight to the card but they’re running out of time to make their final card of the year as strong as they usually do.

matchmaking the ufc welterweight division for 2021