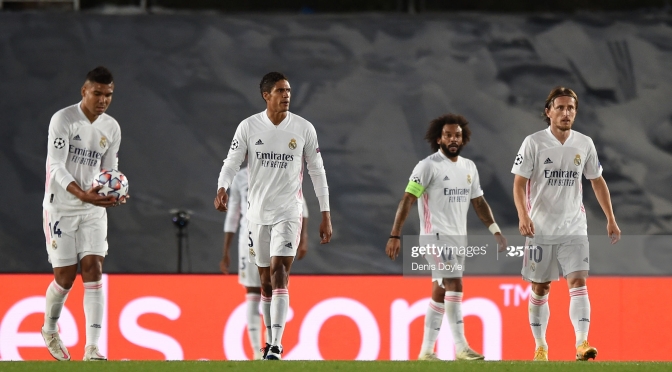 After defeat at the weekend to Cadiz, Real Madrid began their Champions League campaign with a stunning 3-2 defeat to Shakhtar Donetsk.

Zidane rotated the team with a view to the El Clasico this weekend with Eder Militao, Fede Valverde, Rodrygo, Marco Asensio and Luka Jovic all starting the game. It started badly, with Shakhtar taking a more than deserved 3-0 lead into the half-time break.

Luka Modric and Vinicius Jr pulled goals back for Madrid in the second half as Zidane made changes, but it wasn’t enough. Valverde saw a 93rd minute strike ruled out by VAR for an offside, but it would’ve been an undeserved draw had the result stood.

The result means that in nine games without Sergio Ramos in Europe since he came to the club, Madrid have won just once. Once again Zidane’s side struggled in the Champions League without the stardust of Cristiano Ronaldo to lead them, while Marcelo is well past his peak now at left-back.

After spending a grand total of zero during this summer transfer window, the Real Madrid squad looks very stale right now. Despite the return to the squad of Martin Odegaard, Madrid look slow, weathered and it’s quite clear the squad is full of top players at the end of their career right now.

Considering the side is one of the biggest in the world in terms of name, the lack of real star quality in the squad is shocking.

Eden Hazard is the star man but he has barely featured during his 18 months at the club. Constant injuries have seen him in and out of the side but even when he has played he has failed to impress, scoring just one goal in his Real Madrid career so far.

While Vinicius Jr, Marco Asensio and Rodrygo are exciting prospects, their games are riddled with inconsistent displays. It stops the team being a consistent threat and means that the only threat they have on a regular basis is Karim Benzema.

As good as Benzema is, he is 32 years old now and will be 33 before the turn of the year. He is another top level footballer who is coming to the end of his career. Last year Madrid started in a stiff and slow manner once again but the introduction of Ferland Mendy and Fede Valverde into the side really helped inject new blood and energy into the side.

Zidane was rightly praised for those decisions as it ultimately led to Real Madrid winning La Liga after lockdown. Zizou needs to find more inspiration once again this season to find a way to extract a similar change in fortunes or he could be in trouble.

He needs to find it quickly too with the fixture against Barcelona coming up this Saturday afternoon. Should Madrid suffer a third consecutive defeat in all competitions, culminating with defeat to their fiercest rivals, Zinedine Zidane will likely see his head on the chopping block with the media sharks circling the Bernabeu.

manchester united stumble across winning formula in win over psg