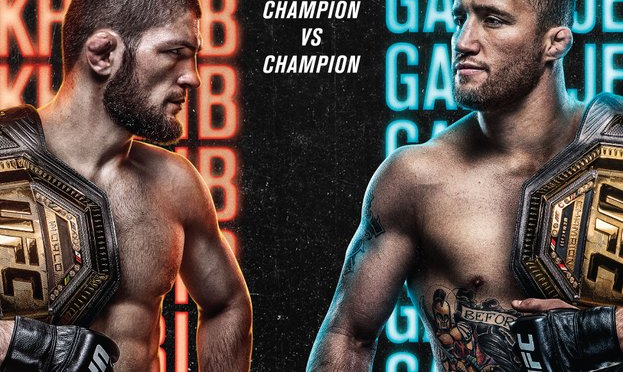 After a month-long stay on UFC Fight Island, the grand finale is upon us as Khabib Nurmagomedov defends his UFC lightweight championship against interim champion Justin Gaethje at UFC 254.

A stacked card, with a six-fight main card, has been put together for the fans’ viewing pleasure and should be one of the best events we’ve seen since the pandemic started back in March.

With 12 fights scheduled to take place, I will break down each fight and give my prediction as to the winner, method of victory and round while giving my analysis on both fighters too.

Last weekend I got a very respectable 8/11 correct predictions with three perfect picks, so lets see if I can better that on this 12 fight card. I’ve already predicted the prelims, which you can check out here.

This fight has been booked three times before UFC 254 during the pandemic and fallen through every time. My prediction remains the same though. The first time these two fought each other was one of the strangest fights in UFC history. Cutelaba came out super aggressive and nearly came to blows in the octagon with Ankalaev before the fight even started, before employing a “drunken master” strategy where he acted hurt when getting hit to egg Ankalaev on. It backfired though when the referee stepped in insanely early and handed Ankalaev a TKO win. Realistically, Ankalaev is the better fighter. Both are strong wrestlers with powerful strikes but the Russian mixes his strikes up better with kicks too and his defence is much better. Cutelaba’s best chance is to hang in there until Ankalaev gets tired, or he lands a big punch.
PICK – Magomed Ankalaev via Knockout, Round 1

‘Lucky’ Lauren Murphy steps into the octagon on the back of a three fight win streak when she takes on short-notice step in Liliya Shakirova making her UFC debut. Shakirova has also won three in a row coming into this fight, with a knockout win in her last bout over a year ago. Murphy is one of the pioneers of women’s MMA and at 37 year old, she was due to take on Cynthia Calvillo in a title eliminator in the flyweight division. Calvillo is out but Murphy wants to fight and she should be able to win this pretty comfortably. Shakirova is no pushover. She throws great front kicks and spinning kicks and has good striking but she will have a reach disadvantage and Murphy is just so experienced and in arguably the best moment of her career that she should see this one through.
PICK – Lauren Murphy via Unanimous Decision

After a stunning debut victory on Dana White’s Contender Series, Phil Hawes re-enters the octagon just 6 weeks later to take on UFC debutant Jacob Malkoun. Malkoun is a grappler who trains with Robert Whittaker in Australia who is undefeated with two knockouts from four career wins. Hawes has won his last four in a row via first round stoppage and I’d be surprised if he didn’t make it five in this one. His leg kicks are fantastic and he has real one punch power and hand speed. Against someone as green as Malkoun who’s strengths lie elsewhere, it should be a short night.
PICK – Phil Hawes via Knockout, Round 1

The heavyweights make their mark on this card as two big men square off in this one. Volkov’s last fight saw him defeated by Curtis Blaydes in their main event back in June, while Walt Harris got dominated and knocked out in an emotionally charged performance against Alistair Overeem in May. Both men are power strikers with genuine knockout power, but Volkov for me is comfortably the more well rounded mixed martial artist. All of Harris’ wins have come by knockout, with 11 of them coming in the first round. If Volkov can withstand the initial burst that Harris will come out with, I expect that he will control the fight using his length and clinch to come away with a convincing decision win.
PICK – Alexander Volkov via Unanimous Decision

I’ve kind of gone over this fight already earlier this week, when I explained why I’m all in on Robert Whittaker to beat Jared Cannonier, but I’ll do it again here in a snappier way. Whittaker is one of the best middleweights of all-time and despite his chin showing him up on occasion in recent fights, he’s lost just once in his last 12 and that was to lose the title to Israel Adesanya. His level of technical kickboxing is among the best ever in the UFC and his leg kicks and explosiveness have seen him beat some of the best the company has to offer, including Darren Till last time out. Cannonier is on a streak right now that has seen him win three in a row all by knockout and he absolutely has the power to put Whittaker away. He has to hit him cleanly first though and while Whittaker has been dropped in each of his last four fights, only Adesanya was able to finish him. He is durable, explosive, fast and powerful himself. Cannonier, for me, is a wrecking machine but when it comes to technical aspects he is a level below ‘The Reaper’ and should the Aussie mix in his takedowns too he should win this fight pretty comfortably. Cannonier absolutely has the knockout power but Whittaker avoids it for the most part and takes a one-sided decision win.
PICK – Robert Whittaker via Unanimous Decision

The biggest fight of 2020 by a country mile as the undisputed lightweight champion takes on the interim lightweight champion looking to unify the belts once again. Khabib Nurmagomedov is 28-0 having destroyed the entire lightweight division. He has arguably never lost a round in his UFC career and has started to search for finishes even more aggressively than he used to. Gaethje is a tank who has powered through the UFC since entering as an undefeated fighter. He dismantled Michael Johnson in his debut before incredible performances against Eddie Alvarez and Dustin Poirier ended in knockout defeats. He bounced back from that with first round knockout wins over Edson Barboza, James Vick and Donald Cerrone before destroying the divisions boogeyman Tony Ferguson over five rounds for a TKO win. While he’s never shown it in his MMA career, Gaethje is a world class wrestler and will be the toughest challenge Khabib has ever faced in the cage. Khabib has almost been over-looking Gaethje during the build-up to this bout, constantly talking up a potential bout with Georges St-Pierre to move to 30-0. Despite that, it’s so hard to bet against him. He’s so dominant, so good and so consistent. He only needs one takedown per round to keep the fight there because his top control is so good and I can’t see how anyone stops him getting it. I think Khabib does exactly what he said he would; takes him down, tires him out chokes him out in the later rounds.
PICK – Khabib Nurmagomedov via Submission, Round 4