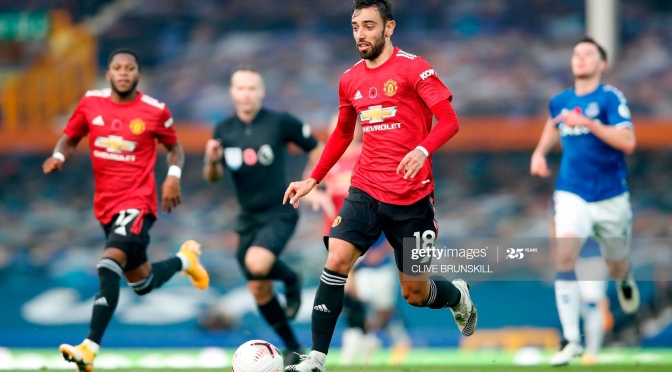 Manchester United bounced back from back-to-back defeats with an impressive 3-1 win over Everton at Goodison Park on Saturday afternoon.

The Toffees took the lead through Brazilian winger Bernard, but two goals from Bruno Fernandes turned the game on it’s head and had Manchester United ahead before half-time. A counter attack in stoppage time saw Fernandes also supply an assist for Edinson Cavani, as the substitute scored his first goal for the club to wrap up the three points.

Despite the two goals and assist, Fernandes rightly earned some criticism online and from the commentators for an erratic performance. He lost possession 22 times and could easily have been sent off for two yellow cards after making some questionable tackles after being booked in the 50th minute.

He also made some odd decisions, shooting from 40 yards from a free-kick late on as well constantly looking to force a final pass rather than just retaining possession as the game hung in the balance.

It’s a criticism that isn’t new for Fernandes, with many fans growing tired of the turnovers he produces considering a large portion of his goals have come from the penalty spot.

In games where the rest of the team weren’t performing, his inability to help control a game and keep the ball has become a thorn in the side of a team struggling for results more recently. A game such as today though, proved why many refuse to accept that he needs to be dropped from the team.

The reality is somewhere in the middle. Yes, Fernandes is incredibly effective and productive from a midfield position. Yes, he has quality in the final third and yes, it’s something that Manchester United have dearly missed.

It’s also true though, that Fernandes gives the ball away far too often, makes bad decisions far too often and doesn’t need to play the game at 100mph as he usually does.

All those things are true, at the same time, and not exclusive to an opinion of the player leaning one way or the other.

With Ole Gunnar Solskjær’s side almost exclusively relying on individual quality as an attacking plan when not counter attacking, he seems to have found more of a balance in the side when Scott McTominay and Fred are banked behind Fernandes.

The duo act almost as an insurance policy for his errors, with Solskjær seemingly accepting the fact that those flaws are just part of his game. Maybe some fans need to start doing the same.

Manchester United aren’t in a position right now where they can pick and choose how their goals come. In a period where the more technically sound midfielders in Paul Pogba and Donny Van De Beek can’t get in the team (rightly or wrongly), Fernandes’ goal contributions become even more invaluable.

In an ideal world, Fernandes is able to keep up these numbers while turning in performances that are pleasing on the eye while also not littered with mistakes. If he keeps scoring and creating goals in this manner though, United need to find a way to change the team to make it okay rather than stifle him and potentially lose what he brings to this side.

Football is a simple game. Right now, Fernandes on the pitch seems to equal goals or assists. Goals and assists win you games. That is what Manchester United need more than anything right now – to win games.

why everton won’t make the top four this season