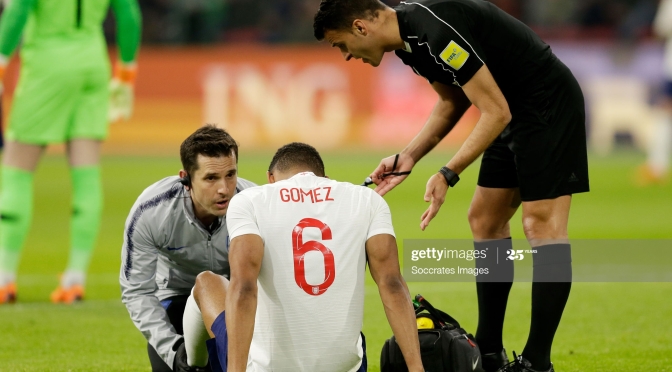 This time it’s Liverpool who are the unlucky side, after it was revealed that defender Joe Gomez is likely to be sidelined with a knee injury suffered in training with the England squad.

While the amount of time he’ll miss is unknown as it stands, England boss Gareth Southgate revealed that the defender was in ‘a great amount of pain’ and that ‘nobody was around him’ when the injury occured. The fear is that he may have re-injured the ACL that he damaged back in 2015 that saw him miss the best part of a year of action.

With Virgil Van Dijk already ruled out for the rest of the season after tearing his ACL against Everton, Joel Matip with plenty of his own fitness issues and stand-in centre back Fabinho already injured too Gomez’s injury was the last thing Liverpool needed during this break.

Nathaniel Phillips and Rhys Williams have both filled in alongside Gomez in recent weeks but together as a pairing Liverpool will struggle to defend their title. This surely makes it likely that they will dip into the transfer market in January for a new defender, especially if the 23 year old’s injury turns out to be serious.

So what options do they have in January? Who is a defender of the necessary calibre that they could try to bring in?

The obvious candidate is Dayot Upamecano. The RB Leipzig defender was linked with a move away from the Bundesliga side in the summer, with Manchester United’s interest reportedly very strong. A move never materialised after he put pen-to-paper on a one-year extension but is expected to make the move away next summer when his €45m release clause kicks in.

Liverpool could use their excellent relationship with the club following their signing of Naby Keita to their favour, by paying more than release clause to get him in early ahead of the inevitable summer competition.

Another option could be Bayern Munich defender David Alaba. The Austrian international is out of contract at the end of the season and the German side revealed recently that talks over a new deal have been halted for now.

A move for Alaba wouldn’t be cheap despite that, with the player reportedly demanding large wages hence the failure to agree a new deal with the European champions. If Liverpool could agree personal terms then Alaba would arguably be the best option, as his versatility would also strengthen the squad across several areas even once their current injured options return.

Bayern Munich have briefed that they don’t want to sell the player in January but if he agrees a move elsewhere, which he can by FIFA rules, an offer of cash could tempt them to part ways early rather than lose him for free at the end of the campaign.

A left-field option could be young Frenchman Jules Kounde of Sevilla. His partnership with Diego Carlos was a huge factor in the Spanish side lifting the Europa League last season and he has continued his good form into this season. Sevilla currently sit in mid-table but his individual performances have been excellent.

He has a release clause of £82.5m, with Manchester City showing interest in the summer and Sevilla showing a willingness to do business at around the £60m mark. That is on the high side but at just 22 years old, he would be a long-term investment for the club.

A cheaper option could be Schalke’s Ozan Kabak, who the club have reportedly been tracking for a while now. With a fee of £20m put on his head, Liverpool could look to bring him in as a cheaper alternative who still has implications for the future of the club at just 20 years old.

The Turkish international is very strong in the air, good positionally and willing to put his body on the line to block the ball but his weaknesses are generally on the ball. These may become exacerbated at Liverpool, who tend to dominate possession in most games they play.

At just 20 years old, there is plenty of room for improvement and coaching to mould the player but he’s also got more than enough top flight experience to help out with their immediate problems.

Whoever the Reds decide to bring in, if anyone, will have huge boots to fill and the expectation would be that they hit the ground running for Liverpool to be able to push on and continue challenging for honours.

are england rushing jude bellingham into the senior squad?

4 thoughts on “Who Should Liverpool Sign At Centre Back in January Following Joe Gomez Injury?”