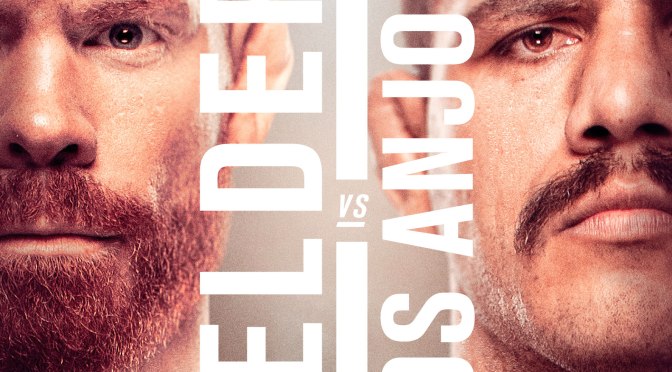 A wild week surrounding this fight card will finally come to a head at the UFC Apex when former lightweight champions Rafael Dos Anjos takes on Paul Felder, who steps in on five days notice for this main event.

After Islam Makachev withdrew from the fight with injury, Felder stepped in from the commentary booth to put his gloves on once again with the hope that a big win on short notice can get him a top five opponent in the near future.

The fight will have 11 other fights on the card too, including Brendan Allen taking on Sean Strickland in a short-notice fight following his fight against Ian Heinisch falling through on fight night last week.

Last weekend, I correctly predicted 8/10 fights with three perfect picks for a pretty solid week of predictions. This week with 12 fights on the card, I’ll see if I can better that and continue with a pretty decent percentage. I’ve already predicted the prelims of the card here, so lets get on with the main card.

Eryk Anders comes into a fight as an explosive athlete who just near enough refuses to use his athletic gifts, while Antonio Arroyo looks to bounce back from his UFC debut defeat to Andre Muniz almost exactly a year ago. Anders has lost four of his last six since abandoning raw power and trying to become more well rounded. It means he has started throwing less shots and timing takedowns badly, despite his wrestling prowess in his past. Arroyo is a specimen himself but his cardio really let him down in his bout against Muniz, although he showed impressive kicking skills and has proven he has the ability to end fights inside the distance having only won via decision once. I have to go with Anders in this one, simply because if he turns up and executes a game plan his skillset is better suited to this fight. He can get takedowns and has power in his hands which should keep Arroyo tentative enough for a decision win and a more dominant end of fight period when the Brazilian’s cardio starts to fail him again.
PICK – Eryk Anders via Decision

A fun fight between two up and comers in the women’s strawweight division where matchmakers have done a great job. Both 21 years old, Hansen is looking to make it back to back wins in the UFC following her win over Jinh Yu Frey in June while McKenna makes her UFC debut following a decision win on Dana White’s Contender Series back in August. Hansen has the better wrestling but often puts herself in dangerous positions with poor striking, which is where McKenna excels. She’s got slick striking and is capable of sinking in submissions quickly in a scramble but her wrestling is completely unproven. It should be a really good fight to watch but I think Hansen’s ability to get the fight to the ground should be enough to win her the fight.
PICK – Kay Hansen via Decision

This is a fight that doesn’t really deserve it’s place on the card, as two middleweights not in the upper echelons of talent on the roster take each other on. Julian Marquez is a straight up brawler. He comes out from the opening bell looking to take your head off, even after he gasses himself out and his technique leaves him behind. Safarov on the other hand has nothing particularly stand out about his game and also has cardio issues of his own. It’s a weird fight that is essentially on just to build Marquez up again after two years off and give them a reason to release Safarov. Marquez lands a big punch early in the first and wraps this one up quickly.
PICK – Julian Marquez via Knockout, Round 1

A welterweight bout between two power punchers is the penultimate fight of this card. Alhassan has ten wins in his career and all have come via knockout but his last fight saw him unable to put away debutant Mounir Lazzez for his first defeat since 2017. ‘Khaos’ Williams has won seven fights in a row with four stoppages (two KO’s, two submissions) including his last fight against Alex Morono where he won in just 27 seconds. With that said, all paths lead to an Alhassan win in this one. He’s more powerful and a better wrestler if it gets to that but Williams would need to survive the opening round without getting his head taken off. The likelihood is that they both get into a phone box and exchange hooks, with Alhassan putting ‘Khaos’ to sleep.
PICK – Abdul Razak Alhassan via Knockout, Round 1

Former lightweight world champion Rafael Dos Anjos returns to the division for the first time since 2016 to take on fighter turned commentator turned cornerman turned fighter again Paul Felder on just five days notice. Felder’s last appearance in the octagon came in defeat to Dan Hooker back in February, where he teased retirement. Dos Anjos moved up to welterweight and did well initially but as he got to the top of the division the better fighters chewed him up. A win over Kevin Lee sits between defeats to Colby Covington, Kamaru Usman, Leon Edwards and Michael Chiesa meaning he is 1-4 in his last five. Felder is a tremendous kickboxer with good power and speed and great durability. Dos Anjos was one of the best pressure fighters around during his peak with excellent boxing and solid grappling skills too but he has regressed in recent years and is unlikely to get back to where he once was. If this was the originally scheduled fight and both fighters had a full camp, I’d go with Felder. But with five days’ notice at such a high level it’s hard not to go with RDA due to the fact he’s had a full camp and will be in fight mode. It’s a true 50/50 fight though and should be an absolute banger.
PICK – Rafael Dos Anjos via Decision