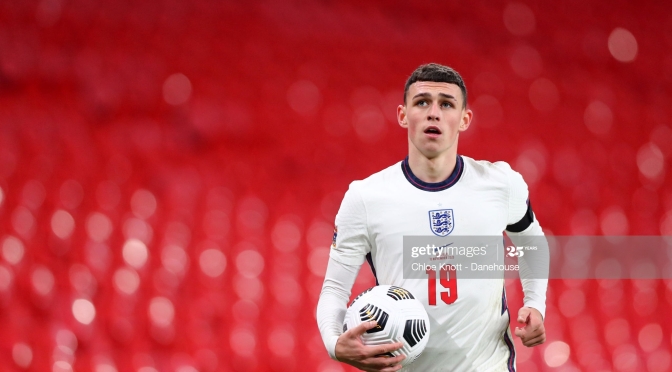 The international break is over and England have had a relatively successful time of it, with new contenders for the squad emerging.

Jack Grealish and Mason Mount both impressed, starting all three fixtures during the international break – proving in the process that they can start together for their nation.

It was another name who made the most impact in England’s 4-0 win over Iceland on Wednesday night, as Manchester City youngster Phil Foden scored his first two international goals to take the limelight.

Foden is seen as part of the next generation by many but to me he is already good enough to be the centrepiece of this current side.

Since 2017 when he first broke into the Manchester City senior squad, he has impressed every time he’s played. He is tidy technically, wise beyond his years on and off the ball and a fantastic decision maker when placed in a scenario where he needs to think quickly.

At 20 years old he is now starting to feature more regularly for Man City and is becoming a regular in the England squad, having been picked in two of the last three squads – his only absence being through punishment.

His technical quality is so high, he may already be among the top percentile in the national team. England could do much worse than build around him from now.

Despite world class talent like Harry Kane and Raheem Sterling in the squad, Foden has the versatility to play in several positions and using him as the centrepiece wouldn’t necessarily mean he has to knock one of them out of the side.

Foden’s international career is likely to last beyond another decade so why not start the process now as he gets better and better?

He is more than good enough to play with the current top dogs and for my money he is the top dog of the next bunch that are coming through.

Much like Wayne Rooney at Euro 2004, he wasn’t the top figure in the side but he took the burden on his shoulders and ran with it. Foden is more than capable of doing the same thing.

Put Foden into a central position in the team, where his creative and technical qualities can shine the most and watch him thrive. Don’t put him out wide and waste those incredible qualities in the way England did with someone like Joe Cole.

4 thoughts on “Build The England Team Around Phil Foden… Now!”