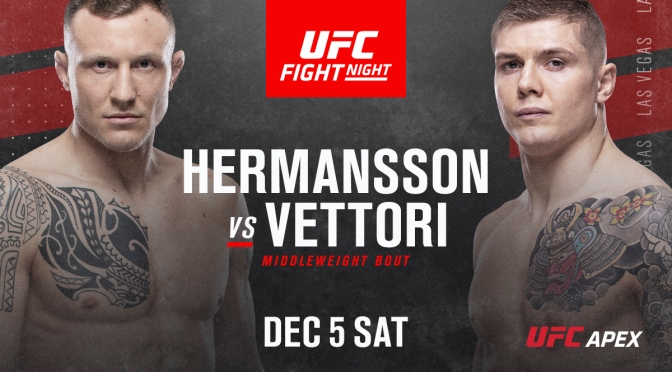 Another UFC main event has been altered after Kevin Holland was forced to withdraw from his main event slot against Jack Hermansson, with Marvin Vettori stepping in on short notice.

Holland was originally a replacement in the main event, after Darren Till withdrew from the fight having not fully recovered from a knee injury picked up in his summer fight with Robert Whittaker.

However it emerged over the weekend that ‘Trailblazer’ has tested positive for COVID-19 and will not be able to fight on December 5th.

After quick negotiations, Vettori has stepped in for the chance to stake a claim in the higher rankings of the division and will face ‘Joker’ Hermansson in the main event.

Vettori is currently on a three-fight win streak, with his last defeat coming to now reigning champion Israel Adesanya in a close split-decision.

Had he won that fight, there’s no telling how different the two’s career paths would have been with Adesanya now one of the biggest stars in the sport. As it stands though, he comes into this fight as the No.13 ranked fighter and will look to jump way up against the number four Hermansson.

As for Holland, his quest to go 5-0 in the calendar year 2020 isn’t done just yet. Despite not being able to compete on this card, he has now been booked to fight against Jacare Souza at UFC 256 the following weekend. Souza was originally scheduled to fight Marvin Vettori at the event.

While it’s a blow for Holland to go from fighting a top five opponent to someone unranked due to something out of his control, Holland knows that a win will see him remain high on the UFC’s watchlist and can expect big things in 2021 should it happen.

As for Jack Hermansson, credit goes to him for taking on all comers as he moves on to his third opponent for this event. His ranking is the thing at stake and a win over these lesser guys likely doesn’t do much for him in his quest to get a title shot but staying active is something Dana White always compliments.

With this change it will be five consecutive UFC main event amendments or cancellations, stretching back to Islam Makhachev’s withdrawal from his bout against Rafael Dos Anjos.

ufc vegas 15 fallout: ‘lionheart’ smith not done yet after win in main event