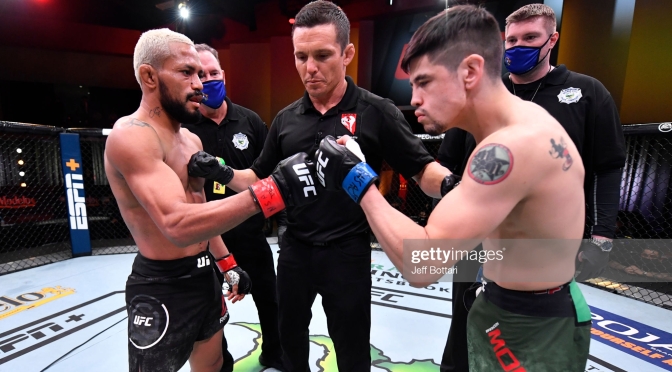 The final UFC pay-per-view of the year delivered and then some as we saw two new contenders rise as well as a fight of the year contender in the main event.

Deiveson Figueiredo and Brandon Moreno made a historic three-week turnaround to compete for the flyweight title and fought to a majority draw over five rounds, in what many are calling the fight of the year.

‘God of War’ Figueiredo was given the win on one judge’s scorecard, while the two others rendered it a draw following the champion having a point deduction for a violent low blow in the third round.

Both men stepped forward landing aggressive strikes on each other, punches that would likely have seen any other flyweight crumble to the floor unconscious. Instead, we saw these two warriors keep coming forward and even scramble on the mat in takedown situations to get back to trying to concuss each other.

The result will likely raise the stock of both men but also the flyweight division as a whole. With a rematch almost inevitable now between these two, the UFC’s original plans for Cody Garbrandt to move down to 125lbs and add some name value to the division may not be necessary.

Figueiredo has made a name for himself this year as a violent destroyer, while Moreno’s performance in this fight will almost certainly have gained him some new fans to go with his old ones.

In the co-main event, Charles Oliveira proved that he does belong among the elites of the lightweight division with a completely dominant decision victory over ‘El Cucuy’ Tony Ferguson.

The Brazilian completely outclassed Ferguson on the mat for three rounds as he toyed with him and was able to do whatever he wanted for the most part of the fight.

The one-sidedness of the fight was frankly quite shocking, with many expecting that Ferguson would be able to bounce back from his defeat to Justin Gaethje in May. But he never got the chance to get going at all, as Oliveira managed to outland him on the feet in the first round to the point where Ferguson moved for a clinch.

Oliveira used that scenario to lift Ferguson and put him on the ground and that was the end of that. A nasty armbar attempt in the final seconds of the first round showed that Ferguson is still as tough as ever, as he refused to tap despite the submission being locked in perfectly.

The rest of the fight saw Oliveira maul Ferguson, in a way that can only be comparable to how Khabib Nurmagomedov mauled his opponents during his career.

It put a magnifying glass on the classic Khabib vs Ferguson fight that we all wanted but never got. Many believed that Ferguson’s ability to fight off his back would cause ‘The Eagle’ more problems than anyone else could. But his performance at UFC 256 has confirmed my opinion that the top game would surely just be too much to handle from the bottom, no matter how good he is.

Oliveira now will move on to either a title fight or a guaranteed number one contender fight, depending on the outcome of Dustin Poirier vs Conor McGregor in January and the future of Khabib Nurmagomedov.

In the middleweight division, Kevin Holland proved to everyone that he’s a serious player in the 185lbs division with a stunning knockout win over Jacare Souza.

‘Trailblazer’ was expected to be tested on the ground by the multiple time jiu-jitsu champion, but what followed was something that proved he is a true contender in the division.

Immediately after being taken down, Holland threw heavy elbows to the head of Jacare which clearly hurt him. He then tee’d off on him from his back, KO’ing Souza with vicious punches.

Holland was originally due to fight No.4 ranked Jack Hermansson the previous week, but a positive COVID-19 test cost him that position. After Hermansson’s defeat to Marvin Vettori in that bout, a rescheduled bout between the two could be on the cards as Holland looks to shoot up the rankings in pursuit of a title shot.