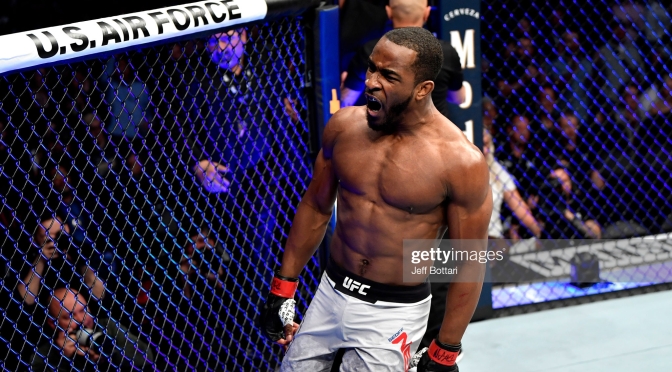 As the UFC looks ahead to their final card of the year, there is a growing trend right now of new contenders coming to the attention of everyoe.

In recent weeks we’ve seen Marvin Vettori move into the top five of the middleweight division, while Kevin Holland grabbed the headlines with a stunning knockout of Jacare Souza. We’ve also seen Charles Oliveira dominate Tony Ferguson to enter the lightweight title picture, while Brandon Moreno stitched his name into the minds of MMA fans around the world with his performances at UFC 255 and UFC 256.

After Leon Edwards’s bout with Khamzat Chimaev was scrapped due to the Briton testing positive for COVID-19, the main event was changed as Stephen ‘Wonderboy’ Thompson and Geoff Neal stepped up from the co-main slot.

That means the welterweight division stays in the limelight, but these two warriors now have the chance to leapfrog the two in the scrapped main event in the title scene.

Currently, Kamaru Usman is scheduled to fight Gilbert Burns for the welterweight championship in the first quarter of 2021. While a date isn’t announced, Usman is the heavy favourite for that fight. Should he win, his next contender is up in the air.

Edwards is currently on an eight-fight win streak, while Chimaev has cut through the UFC roster like a hot knife through butter so far. Chimaev’s rise and Edwards’ record had that fight pitted as the number one contender bout going into this card.

But with the fight scrapped until further notice, an impressive win for either Wonderboy or Neal could propel them ahead in the pecking order.

Wonderboy has challenged for the title twice before, fighting Tyron Woodley to a draw before losing the rematch back in 2017. Since then, he has gone 2-2 with wins over Jorge Masvidal and Vicente Luque while being beaten by Darren Till and Anthony Pettis.

Neal on the other hand is on a seven-fight win streak and is undefeated in the UFC, with his most recent win being a 90 second knockout of grizzly veteran Mike Perry.

‘Handz of Steel’ has earned his nickname from eight knockout wins in ten finishes and he moves into this fight knowing he makes a big step up in competition.

This will be the toughest fight of his career, against a fighter who is notoriously hard to hit with his style and range control. He has been knocked out before, by a bloated Pettis, but his performance against Luque proved he is still as good as ever.

Neal, and everyone with a brain, knows that his best hope of winning this fight is either by knockout or if he can get the fight down to the ground and control the fight from there. To do that though, he needs to get past the kicking and striking game of a world class karate fighter in Wonderboy.

The winner of this bout will undoubtedly see their stocks rise once again but the expectation is on Neal. He is the bookies’ favourite ever so slightly but also the one the fans want to see progress up the rankings.

Neal will be hoping to follow the current trend of new contenders heading into the new year, while Wonderboy will be hopeful that he can run it back to a title shot one more time.