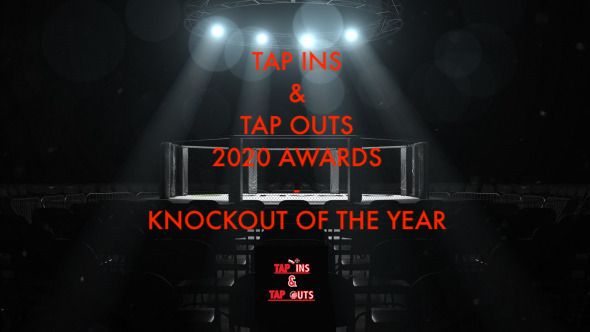 The UFC have finally completed their set of fights for the year of 2020 and what a crazy year it was.

456 fights total in a year that saw a global pandemic bring a close to all live sports for almost two months at least before Dana White and co. became the leaders of getting the show back on the road.

We’re going to rank our personal top five of the year, before handing out the award for each of the following categories:

KNOCKOUT OF THE YEAR

When two hard-hitting knockout artists meet in the octagon, usually we get a tentative fight with both fighters well aware of potential consequences. That isn’t what happened in this one though.

Alhassan and Williams met in the middle, threw a couple of shots each before Williams countered a leg kick with a straight right hand that put Alhassan to sleep. He was stiff as a board and out cold as Williams landed on more strike just before the referee could get there to end the fight. From start to finish, this one lasted just 30 seconds. Stunning.

The first event of 2020, with the biggest star in the sport in the main event – and it delivered.

Conor McGregor returned to the UFC after over a year away to take on Donald ‘Cowboy’ Cerrone at 170lbs, with many interested to see if the power would carry up the weight divisions. McGregor came out like a bull immediately swinging his trademark left hand, but Cerrone ducked and clinched. From there, Conor landed four shoulder strikes which broke ‘Cowboy’s nose before following up with a head kick and violent ground and pound for a 40 second knockout. What a night.

After the UFC was forced to a halt with the rest of sport thanks to the coronavirus, it returned with a bang with UFC 249.

On a super stacked card, Calvin Kattar met Jeremy Stephens in a featherweight clash where both men knew a win would get them into title contention. The two engaged in what was a fantastic stand-up battle, with Kattar proving he is one of the best pure boxers in the company. But it was a perfectly placed elbow to the jaw of Stephens that ended this fight, dropping Stephens before finishing with some ground and pound. It was an iconic KO and one that will be on Kattar’s highlight reel for the rest of his career.

A three-fight losing skid was snapped in the greatest way possible by Cody ‘No Love’ Garbrandt at UFC 250, with this violent knockout of a former contender.

Garbrandt returned to the octagon after over a year absence and looked back to his best, with sharp kicks, good scrambles and heavy hands at play as Assuncao struggled to cope. As both fighters prepared to enter a third and final round, Garbrandt found himself against the cage with his opponent loading up a right hook. ‘No Love’ instead ducked down low, before exploding up with a wild right hook of his own. He took Assuncao’s strike to the chest while his right hand landed flush on the jaw, knocking him unconscious with a single second remaining in the round. Garbrandt walked off with his hand raised, knowing the fight was over and is now preparing for a title shot down a division on the back of it.

A clash between two middleweight prospects who were making relatively quick turnarounds following their UFC debuts.

Buckley had put in a good showing on a week’s notice but ultimately lost via knockout to Kevin Holland two months prior, while Kasanganay won his UFC debut a couple of weeks later. They met here, with many expecting Kasanganay to use his reach and length to keep the powerful Buckley at range for a victory.

Instead, Buckley consistently got on the inside and landed power strikes which clearly troubled Kasanganay. But in the second round Buckley threw a kick that got caught and instead of being taken down or just retreating, he channeled his inner Mortal Kombat characted. Buckley spun with his foot still being held by Kasanganay and kicked with his other leg, landing straight to the face and knocking him out cold. It was visually incredible and something we’ve never seen before. Easily the knockout of the year.