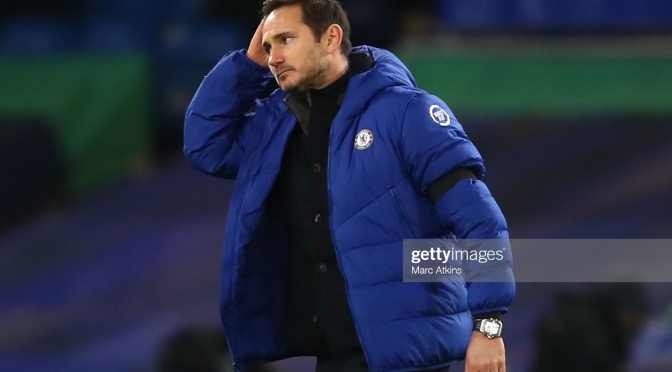 Another defeat for the London Blues as Frank Lampard’s side were comfortably beaten by Manchester City at Stamford Bridge.

Goals from Ilkay Gundogan, Phil Foden and Kevin De Bruyne saw Pep Guardiola’s side cruise into a 3-0 lead before half-time, as they took their foot off the gas in the second half and claimed three points. Callum Hudson-Odoi came off the bench and continued his good form with a consolation goal in injury time to make it 3-1.

Almost immediately after the final whistle went, The Athletic reported that Lampard’s job was under threat and that the club were already looking at potentially replacing him.

While the report listed no names immediately under contention, social media was lively with suggestions.

Some Chelsea fans went with the comedic approach, offering their own services since the club like hiring inexperienced coaches. Others were slightly more cautious about parting ways with Lampard in the middle of the season, since they see next to no benefit to it at this point.

But what is the best option and who are the best candidates?

Sacking Lampard seems like the obvious choice at this point, especially considering the reports that have been leaked out now. While good performances could see him prolong his stay, this type of report will constantly loom over his head at every bad turn.

Keeping him until the end of the season seems like it could be a positive, but if everyone knows he is going to be going then motivation for players and the manager himself becomes an issue.

The best option seems like moving him on and the optimal replacement is likely to be someone who has just come out of a job himself.

Thomas Tuchel was recently dismissed by Paris Saint-Germain and is now available to manage elsewhere. He was replaced by former Spurs boss Mauricio Pochettino, which immediately rules the Argentine out of the running for another job in London any time soon.

Tuchel though is arguably the best man for the job anyway. The German’s previous coaching exploits at Borussia Dortmund and PSG have seen him get the best out of young, attacking talent and put together charges domestically and in Europe.

Chelsea’s squad is full of young talent with a high potential and Tuchel would be able to mould them into a competitive team. He has also previously worked with Thiago Silva in defence, while the club’s two struggling Germans in Kai Havertz and Timo Werner could benefit from a more experienced coach with a more structured philosophy.

Other options could see Roman Abramovich look to tempt a former Chelsea coach to the club – Brendan Rodgers.

The former Liverpool and Celtic boss made his name as a coach as an assistant to Jose Mourinho during the Portuguese manager’s first spell in charge at the club. Since then, Rodgers has gone on to prove himself as a top young coach when it comes to attacking football and developing young talent.

At Leicester he has seen the club use youngsters like James Maddison, Wesley Fofana, James Justin and Youri Tielemans while also identifying top talents like Ricardo Pereira and Caglar Soyuncu.

He has a history with the club and his attacking style will certainly be something fans would like to see. He’s won trophies with Celtic, leading them to a triple treble before leaving mid-season before another title to take over just under two years ago. Since taking over at Leicester, he has turned them into a side that consistently challenges for the Champions League places too.

A familiar face at the club could be a way to keep Abramovich’s standing with fans high after dismissing a club legend in Lampard, so Rodgers fits the bill in that regard.

Another name that has cropped up is that of Julien Nagelsmann of RB Leipzig. The young German coach is another who is widely associated with attacking play and youth development, something that Chelsea and their fans seem intent to have in whoever the new appointment is.

If Abramovich doesn’t care about that, then it’s possible he goes for the experienced Max Allegri.

The Italian has been without a job since leaving Juventus in 2019, when he was replaced by former Chelsea Maurizio Sarri. He has reportedly been learning English in anticipation for his next job but his appointment would certainly come at a lot of fans behest.

Allegri isn’t an expressive manager and doesn’t have the best of reputations when it comes to young players. He is more of a pragmatic coach than all the others listed but he has a lot of trophies on his résumé.

He may not be the most popular appointment at Stamford Bridge among fans, but he’d certainly be the most accomplished and would likely be the best option to get immediate results.

Many foresaw the issues they have had with Lampard, a club legend who had just a single season of management experience. Chelsea are in the process of planning their future and they need to get it right. Now more than ever.

are manchester united really in a title race?

2 thoughts on “Who should Chelsea replace Frank Lampard with?”