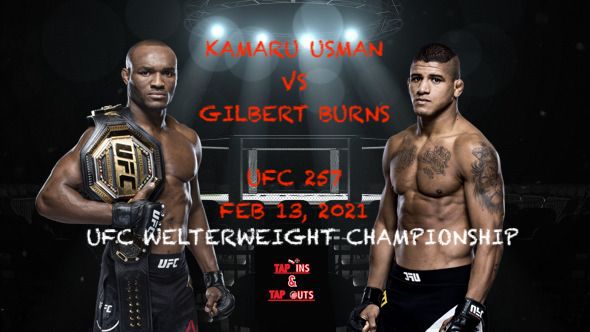 The welterweight championship will be defended at UFC 258 as Kamaru Usman finally defends his title against Gilbert Burns.

The fight has been made for a third time, with the two top ranked 170lbers in the world to fight on February 13th, at a location yet to be announced. It’s expected they will fight at the UFC Apex in Las Vegas.

The fight was originally scheduled for the first Fight Island venture in July 2020, after Burns had defeated Tyron Woodley in dominant fashion in May to become the number one contender.

That fight fell apart when Burns tested positive for COVID-19 during fight week, and was replaced on the card by Jorge Masvidal.

Usman defeated Masvidal in a dominant decision himself, before the fight with Burns was rescheduled for the UFC 256 pay-per-view in December.

That fight fell apart too however, as Usman was healing up from injuries and wasn’t 100% to compete at the time. The pay-per-view was instead headlined by Deiveson Figueiredo and Brandon Moreno, who completed a three-week turnaround to compete for the flyweight title.

Usman has fought just twice since dominating Woodley to win the championship in March 2019, defeating Colby Covington in his first defence with a fifth round knockout win, before the win over Masvidal at UFC 251.

Burns has been much more active in that time period, fighting five times and winning them all. He is now ready to challenge for the title, although he goes into the fight as a heavy underdog.