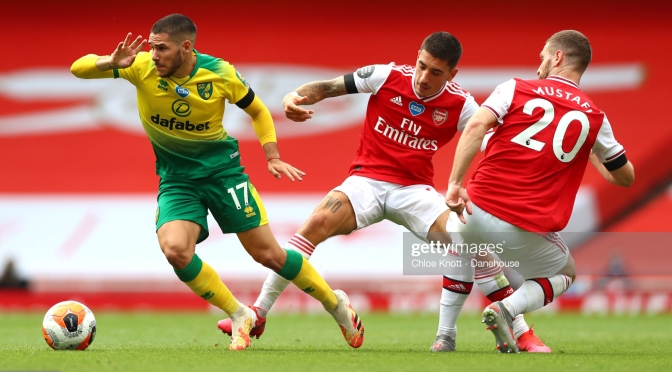 Even a recent good upturn in form for Arsenal hasn’t been enough to paper over the cracks in their squad currently.

After earning just one win in ten Premier League games, the Gunners are now on a run of three wins in a row following victory against Chelsea, Brighton and West Brom. They’ve scored eight goals in those three wins, conceding just one as they seem to have found their rhythm under Mikel Arteta once again.

Prior to this run of results, Arteta was under serious pressure to deliver after the side struggled to score goals or create any sort of clear chances in games.

The poor form of star striker Pierre-Emerick Aubameyang has continued but the blossoming form of academy stars Bukayo Saka and Emile Smith Rowe has seen Alexandre Lacazette find the net four times in these three wins.

With Mesut Ozil still blackballed from the Arsenal squad, the burden currently weighs on the 19 and 20-year-old graduates from the Hale End Academy to lead the creative charge of the side. While it’s working currently, surely it’s too much to rely on these players throughout the entirety of the campaign in their first and second full season of first-team football respectively.

This is why the Gunners continue to be linked with attacking midfielders, most notably Norwich man Emiilano Buendia.

The Argentine has been linked with a move to the Emirates for around £20m, with Norwich reportedly willing to let him leave if their price tag is matched. At 24 years old, Buendia is youthful enough to continue to improve but also has Premier League experience.

While at Norwich last season in the top flight Buendia created 83 chances for his teammates, a number only bettered by Kevin De Bruyne, Trent Alexander-Arnold and Jack Grealish. He got seven assists throughout the campaign and scored just the once, but his performances often deserved more than what the statistics show.

So far this season in the Championship, his good numbers have continued. He has seven goals and six assists in 19 appearances, mostly coming from the right wing to cut onto his wand of a left foot.

Willian has struggled at Arsenal as many expected he would, while Nicolas Pepe has continued to show form that has fans and media questioning why the club spent a club record £72m on him last summer.

With reports suggesting that Arsenal could be willing to let one of Joe Willock or Reiss Nelson go the other way to get a deal for Buendia done, it could be smart business by both parties.

Buendia is clearly too good for the Championship and is going to become unhappy if the club deny him a move to a top Premier League side, should an offer come in. While they are currently sitting pretty at the top of the table, they will want to secure an effective replacement should Buendia leave to ensure they have the best chances of an immediate return to the top flight.

Willock has impressed in domestic cup games and the Europa League this season but hasn’t really broken into the Premier League side, while Nelson hasn’t featured much with so many options ahead of him.

Both players are physically capable of the demands of mens football but also have good technical qualities. Nelson is likely to be the better replacement, playing on the wing and having an eye for goal himself as his seven Bundesliga goals while on loan in 2018/19 showed.

Should either player be given the opportunity to move to Norwich, they may see it as a step down but they should look at it as a chance. If they perform to the level we’ve seen them do before, then Norwich should have enough to continue their charge to the Premier League and then either Willock or Nelson will have the chance to show they are Premier League talents.

It may be hard to leave the club you’ve grown up at and supported your entire life, but footballer’s careers are short and this deal is, on paper at least, the type that sees everyone win.

3 thoughts on “Is Emiliano Buendia the answer to Arsenal’s creative problems?”