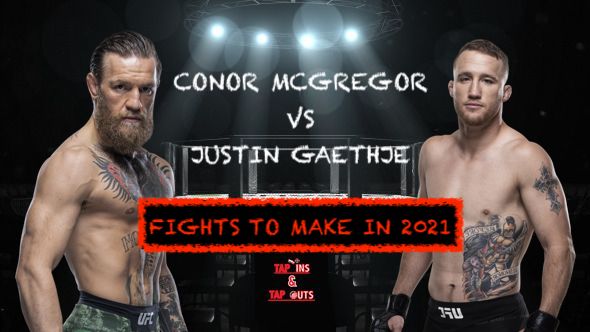 The names involved alone should make your mouth water at the prospect of this fight taking place in 2021.

The biggest star in the sport, Conor McGregor, stepping into the cage with the most entertaining fighter in the sport, ‘The Highlight’ Justin Gaethje.

Two unbelievably gifted strikers, who have a habit of knocking people out with their power and pressure. What an explosive bout it would be, plus it would be personal and have meaning behind it.

After McGregor was beaten by Khabib Nurmagomedov and “retired”, Gaethje was the new entertainer of the division. With a knockout win over Michael Johnson before incredible performances in defeat to Dustin Poirier and Eddie Alvarez, Gaethje had established himself as a fan favourite.

So when McGregor decided he was no longer retired and wanted to come back, everyone knew the fight to make was against Gaethje. It seemed at the time though, that McGregor didn’t want the fight.

Gaethje called him out over social media several times but when McGregor eventually returned it was to fight Donald Cerrone, someone who Gaethje had just knocked out himself.

‘The Highlight’ moved away from the feud, stating that McGregor would have to chase him now after he beat Tony Ferguson in a stunning performance once again but after losing to Khabib Nurmagomedov himself at UFC 254 he needs a big fight as much as anyone.

The first pay-per-view event of 2021 is the ‘Notorious’ one’s time to shine yet again, when he takes on Poirier on Fight Island at UFC 257. A win almost certainly puts McGregor back in title contention, whether Khabib decides to stay retired or come back for one final bout.

If he comes back, the likelihood is that he faces either Georges St-Pierre or the winner of the McGregor/Poirier fight once again.

If the fight against GSP happens or if Khabib decides to stay retired, then the fight between Gaethje and McGregor is undoubtedly the one to make for the vacant championship.

Any fight with McGregor involved is an instant box office hit, but against ‘The Highlight’ in a fight where literally anything could happen, it would legitimately be unmissable.

fights to make in 2021 – israel adesanya vs jon jones