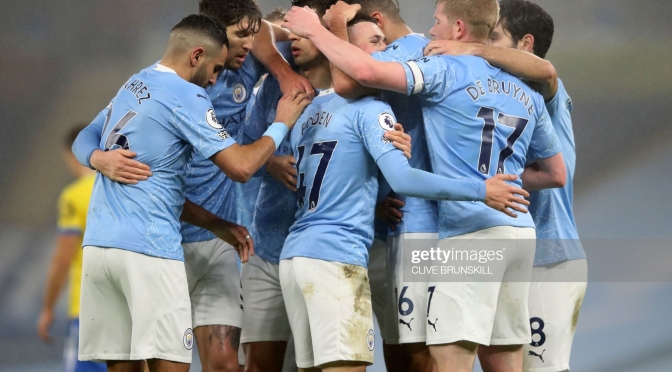 Another win and another clean sheet on the board for Manchester City as they beat Brighton 1-0 at the Etihad Stadium on Wednesday night to move into the top three.

Pep Guardiola’s side made it seven wins on the trot in all competitions thanks to Phil Foden’s first half strike, putting them four points behind league leaders Manchester United with a game in hand.

It was another one of their reserved displays, although just the one goal was probably a bit unfair on their performance as they largely dominated.

It was a performance that deserved praise, as Guardiola’s side played without that focal point up front with Sergio Aguero isolating after coming into contact with someone with COVID-19, while Gabriel Jesus continues to try to recover to full fitness after testing positive on Christmas day.

Kevin De Bruyne, Foden and Bernardo Silva floated while Riyad Mahrez stayed quite rigid in his position out on the right wing. The three playmakers floating just filled in gaps wherever they could and the controlled the ball in attacking zones throughout.

On another day, they hit at least four goals. De Bruyne missed a big chance in the first half, Silva hit the crossbar after some great skill inside the penalty area and Raheem Sterling even missed a penalty in stoppage time after coming on as a substitute.

City’s results against the top six have been very inconsistent so far. They beat Arsenal and Chelsea, drew to Liverpool and Manchester United and lost to Tottenham and Leicester. But they look a very different side now compared to those games. The Chelsea game was most recent and they looked like the City of old.

They also went to Old Trafford in the Carabao Cup semi-final and came away with a fairly comfortable win once again.

De Bruyne looks in imperious form, creating at will, while Foden has found goalscoring natural this season with ten goals in 25 appearances for club and country. Sterling hasn’t quite shown up and is only on seven for the season but at some point it will click for him, while Bernardo Silva and Ilkay Gundogan have rediscovered their good form in recent weeks too.

What’s more impressive though is their stunning defensive record. They have kept 11 clean sheets in their last 14 games in all competitions, conceding just three times in those games. Ruben Dias and John Stones have formed a partnership that has shone and made City their strongest defensively since Vincent Kompany was in his prime.

Joao Cancelo’s form has also been top drawer, whether it be at right-back or left-back. He has filled in for Kyle Walker perfectly in his natural position but even prior to that when playing on the opposite side, he got forward with intent and created well. He has been a revelation for Guardiola.

The defensive situation has improved to the point that they can now afford to score just once to win games. With the attacking potential we already know they have, it means they have an extra gear to go up if they want or need to.

Manchester City aren’t the dark horses in a two-horse title race involving Manchester United and Liverpool. They’re the favourites in a multi-horse race.