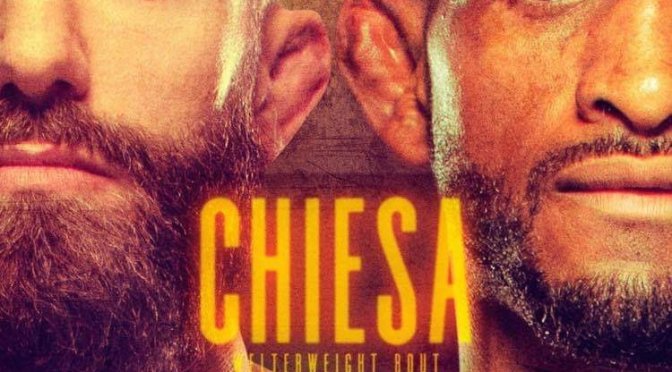 After a banging start to 2021, the UFC moves swiftly onto their second event of the year with a midweek card headlined by welterweights Michael Chiesa and Neil Magny.

Originally supposed to be headlined by Leon Edwards and Khamzat Chimaev, that fight fell apart for a second time when Chimaev withdrew due to complications from COVID-19. The fight has now been rescheduled for March 13, Chiesa and Magny have the chance to take the limelight at 170lbs.

On a 14 fight card, there will be six on the main card which means eight prelim fights to break down and predict.

We already predicted the prelims here, so lets improve our record with the main card now.

Murphy got a very impressive knockout win against Ricardo Ramos last time out, while Andrade’s last fight saw him beat Renan Barao in November 2019. Murphy has power in his hands but is a very good wrestler too, which is the kryptonite to Andrade if there ever was one. He was well beaten on the ground by Petr Yan of all people in his last defeat.

Murphy has the power advantage on the feet and the advantage on the ground if he chooses to take it there, so he should get a pretty comfortable win here.
PICK – Lerone Murphy via Knockout, Round 2

Schnell was on a four-fight win streak before losing his last fight to Alexandre Pantoja via first round knockout, while Nam was close to being cut before two big knockout wins brought him back from the brink against Zarrukh Adashev in June and Jerome Rivera in September.

Nam is a great counter striker with solid power, while Schnell is a fantastic jiu-jitsu practitioner. His issue though is that he likes to stand and bang sometimes, which is just asking for trouble. If he can stay at range and use his grappling game, plus having a good weigh-in, Schnell should get the win.
PICK – Matt Schnell via Decision

Arguably the most un-aesthetically please fighter of all time in Roxanne Modafferi returns to take on Viviane Araujo in the women’s flyweight division.

Modafferi has alternated wins and losses in her last nine fights, going 5-4 including a win last time out against Andrea Lee. Araujo has won six of her last seven fights, losing only to Jessica Eye in December 2019 before beating Montana De La Rosa in September via decision.

‘The Happy Warrior’ loves a dirty boxing fight, punching her way into range before looking to get the fight to the ground with her good top control. Araujo on the other hand is a powerful one punch fighter with good kicks and submission skills. On paper, it should be Araujo all the way but Modafferi has a habit of upsetting the odds. I’m still going to back the favourite, but don’t be shocked if it goes the other way.
PICK – Viviane Araujo via Decision

This fight really doesn’t have any business taking place in the UFC in 2021, as Ike Villanueva takes on Vinicius Moreira.

If it stays on the feet, Villanueva gets a knockout win. If it goes to the ground, Moreira wins by submission. My guess is Villanueva clips him and keeps his spot on the UFC roster.
PICK – Ike Villanueva via Knockout, Round 1

A fight that probably should never be the co-main event of any UFC card, but a chance nonetheless for the UFC to show off prospect Mounir Lazzez to the world.

Warlley Alves is an all-rounder, with tidy striking and a great jiu-jitsu game who hasn’t fought since a 2019 defeat to Randy Brown. Lazzez won his debut on Fight Island in July with a really impressive decision win over Abdul Razak Alhassan, where he showed tremendous striking but also a really good chin. He’s got a good wrestling game if needs be to and he should be able to get a highlight knockout in this one for me.
PICK – Mounir Lazzez via Knockout, Round 2

A wonderful main event tops off what is a bit of a meh card as welterweight contenders Michael Chiesa and Neil Magny meet.

Chiesa is a grappling wizard with three wins in a row at 170lbs since moving up from lightweight, submitting Carlos Condit before earning decision wins over Diego Sanchez and Rafael Dos Anjos. Magny is a wrestling machine with powerful striking, who has beaten all of Jingliang Li, Anthony Rocco Martin and most recently Robbie Lawler by decision in his last three.

Magny’s cardio is his greatest strength in this fight but he also has the striking advantage in this one too. Chiesa will know that when the fight hits the ground, whether he’s on top or on the bottom he is a threat but he’d rather be on top. His wrestling isn’t good enough to get Magny down though so he’ll need sweeps to get there, but Magny’s top game is very good. It should be a great, evenly contested match up but I think Magny’s cardio pulls him towards a decision win.
PICK – Neil Magny via Decision