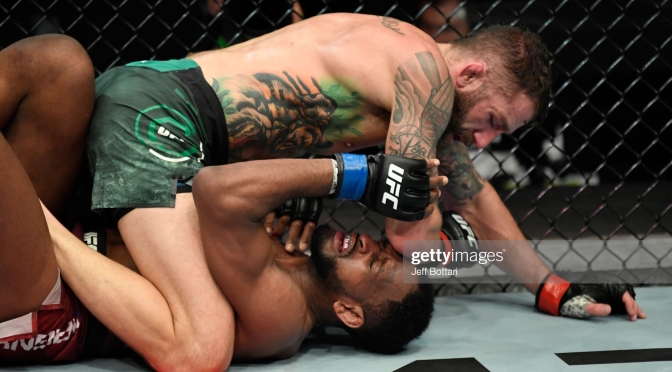 The second of UFC’s triple header to open the year lived up to the hype, with Michael Chiesa taking all the headlines at UFC Fight Island 8.

‘Maverick’ main evented the card in a contender clash with Neil Magny, as both men looked to make it four wins in a row on Fight Island in place of the rescheduled Leon Edwards/Khamzat Chimaev clash.

It was a fight that was razor close on paper with both guys at their best in the top position on the ground, but with Chiesa having the edge in submissions and Magny in striking. What occurred was a lopsided bout, with Chiesa outscrambling Magny at every turn and completely dominating from the top position for a unanimous 49-46 win.

It was a mightily impressive performance from the 33-year-old, who stays undefeated since moving up to welterweight. He now has back-to-back maulings of Rafael Dos Anjos and Magny and after his win on Fight Island he moved to call out number one ranked Colby Covington.

Covington is coming off a dominant win over former champion Tyron Woodley back in September and his only defeat since 2015 came in his title shot against Kamaru Usman. While many are hopeful that Covington will face off with former friend Jorge Masvidal next, there have been problems getting that fight agreed.

Dana White confirmed that the UFC wanted to make it happen, but there has been no movement on that front recently and with Chiesa looking to put a run together for his own title shot, it’s something White could look into.

In his post-fight press conference, he explained his reasons for wanting the fight and revealed he doesn’t believe it’s a fight he’s supposed to win.

“He’s the worst match up for me. Stylistically, that guy should beat me on any given Sunday. From a physical stand point, from a mental warfare stand point, there’s not a lot of boxes you can check that favour me in that fight, but how can I say want to be the champion if I don’t want to fight the best guys?

“Sometimes the best guys are the ones that are toughest for you stylistically, so I look at the top five and I think that’s the hardest fight for me. We’ll see what happens, and if I come up short I come up short, but if I want to be the best I’ve got to fight the best.“

The bout would be great fun, but I can’t help but feel he’s probably looking too high up the ladder right now. Chiesa was ranked at number eight before this win and beat the man ranked below him, so while he should rise he won’t fly up.

A fight against Demian Maia would be fun, but the person he should be looking at is Stephen ‘Wonderboy’ Thompson.

Thompson just obliterated Geoff Neal in December and moved up into the top five himself. But with Edwards already booked with Chimaev and the UFC’s plan to book Covington and Masvidal together, this could be a great match up of styles to cement either as a top five contender as we move through 2021.