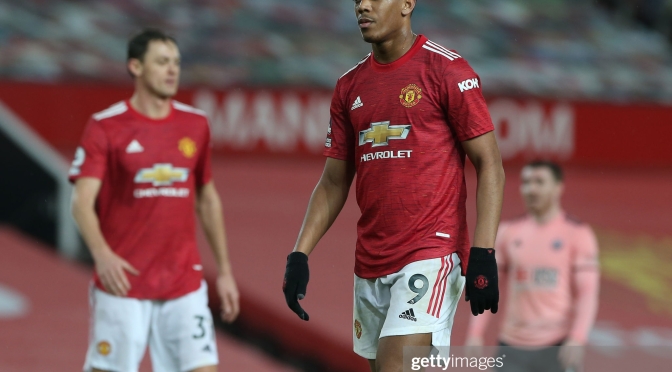 The end is nigh for Martial FC as Anthony Martial turned in a disasterclass for the ages in Manchester United’s 2-1 defeat to Sheffield United on Wednesday night.

The Frenchman started in his preferred central striker role on the night but was absolutely horrendous throughout, as Kean Bryan and Oliver Burke scored either side of a Harry Maguire header to get the Blades only their second win of the season.

It means Manchester United remain in second place in the table, a point behind local rivals Manchester City but having played a game extra.

The performance from everyone was awful, with Harry Maguire probably the only one to come away with some positives on the night, but Martial in particular has struck a nerve with fans.

After pushing on to his best individual season last year, many expected him to kick on this season and really push on to become the number nine he has always claimed to be.

Instead, the 25-year-old has shown a lack of intensity, a lack of movement, a lack of hunger and in truth, a lack of quality.

He has scored just five goals in all competitions so far this season and despite being given chance after chance, he’s not shown anything to suggest that he’s going to kick on past what he did last season.

United are seriously lacking that clinical edge in front of goal right now, to help in these tight games. Edinson Cavani has done relatively well in his performances so far, but its clear as day that he is past his prime too.

With a heavy reliance on goals from Marcus Rashford and Bruno Fernandes, when they’re not firing United become blunt in attack. The Reds are desperate for someone they can rely on to be a genuine threat for 90 minutes in every game they play – someone in the Harry Kane or Erling Haaland bracket.

While the defeat is a result that could happen at any time – no team can win every game – United will see it as an opportunity missed to keep the pressure on Man City as they head into a tough round of fixtures.

They face Arsenal, Southampton and Everton in their next three league games and they’ll need to ensure they don’t do what they’ve become known to do in the Ole Gunnar Solskjaer era and that’s fall into a run of bad results, instead of it being an anomaly.