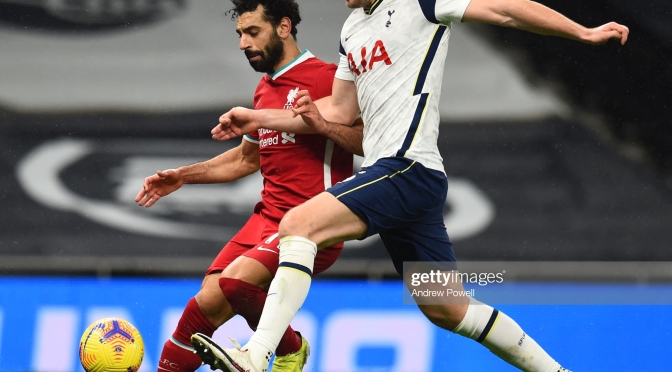 Liverpool kept their title hopes alive as they beat Tottenham for a seventh consecutive time on Thursday night.

Roberto Firmino opened the scoring with a tap-in on the stroke of half time after a lovely ball across the box from Sadio Mane, which Eric Dier inexplicably let roll past him inside the six yard box. Both sides were forced to make important changes at half-time, as Harry Kane and Joel Matip went off injured.

The second half started quickly though, as Trent Alexander-Arnold smashed home a strike to make it 2-0 after a poor parry from Hugo Lloris, before Pierre-Emile Hojbjerg scored a screamer from the edge of the box to make it 2-1 on 48 minutes. Mo Salah had a goal disallowed for a controversial handball in the build-up before a Joe Rodon error allowed Mane to smash a volley into the roof of the net to seal the points in a 3-1 win.

Spurs actually started well, with Heung-Min Son scoring inside the first five minutes, but it was ruled out for a super close offside call. Defensively though, they were wide open throughout the game

Sadio Mane constantly found himself getting in between Rodon and Dier, but his finishing just wasn’t sharp to punish Jose Mourinho’s side.

The first goal was easily avoidable too. Jordan Henderson stepped out of his temporary central defender position to play a pass over the top of the defence to Mane, who was played onside by Dier. Mane brought it down and played a pass across the six yard box, but Dier for some reason opted to let the ball go across him straight to Firmino’s foot to tap into an empty net.

His body language suggested that he was unhappy with the goalkeeper for not collecting the pass before it went through to the Brazilian, but it had to pass him before Lloris could collect it anyway.

Later in the game, he was saved by VAR after another strange decision led to Liverpool putting the ball in the back of the Spurs net. He decided to get tight to Firmino on the halfway line and had his arms all over the striker, which caused the ball to bounce off his arm and on to Firmino’s arm. Firmino laid the ball off and Salah ended up smashing the ball into the net, only for the goal to be ruled out for handball by Firmino.

It was another instance this season of Dier proving he’s just not a good defender. The England international was originally a centre back before moving into midfield under Mauricio Pochettino.

He demanded to move back to centre back under Mourinho and the Portuguese manager has so far allowed him to become the first choice defender. But his performances continue to raise question marks about why that is the case.

Dier continues to let himself and Spurs down as the north Londoners drift further away from a Premier League title race they led at one point.

ollie watkins on the cusp of an england squad call up