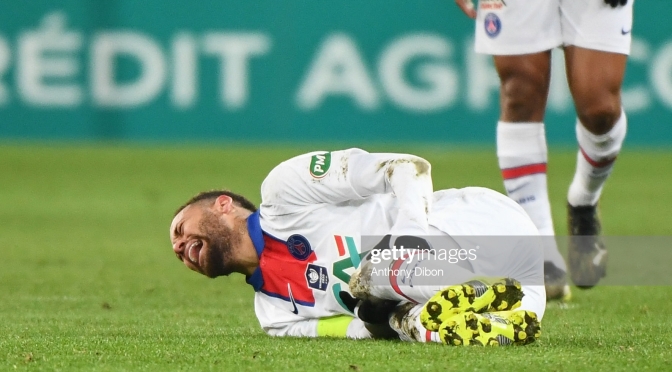 Neymar has once again been ruled out of action for a month after picking up a groin injury during a cup game for Paris Saint-Germain.

The Brazilian winger started against Ligue 2 side Caen in the Coup De France but with his side leading 1-0, the recently turned 29-year-old hobbled off holding his groin.

Further tests the following day revealed an adductor injury for the winger and he has been ruled out of action for the next four weeks. It means he will miss a reunion with his former club Barcelona in the Champions League last 16.

But eagle-eyed fans spotted that a theme has occurred. Neymar’s sister has a birthday on March 11th and Neymar hasn’t been available to play for his club, whether it be Barcelona or PSG, since way back in 2015!

Here’s a breakdown of his absence every year:

At this point it was probably seen as just a coincidence, but Neymar picked up a fifth yellow card of the season against Granada in the match before the one that fell nearest to the birth date. It meant he was unavailable for the Catalan side’s home game with Rayo Vallecano on March 8th, which they won 6-1. Because he was unavailable, the club allowed him to return to Brazil where he celebrated his sister’s birthday with her. He was back on the 14th of March for the win over Eibar, playing 70 minutes.

The same game week the following season, and once again Neymar picked up a fifth yellow card of the season in the game before. He missed the tie against Eibar which Barcelona won 4-1 without him and returned the following week to feature on the 12th March against Getafe, scoring twice in a 6-0 win. Once again the club allowed him to fly back to his homeland, where he was pictured at a huge Disney themed birthday party as she turned 20. Cute.

To avoid question marks around three successive suspensions in the same game week, this time Neymar was conveniently suffering from a “muscular injury” in 2017 and missed a 2-1 defeat to Deportivo La Coruna during his final season with Barcelona. He probably earned the weekend off for this one though, as in the week leading up to the birthday he put in a man of the match performance with two goals and two assists as Barcelona came from behind to beat PSG 6-1 in the Champions League. Despite the muscle injury, Neymar was back in Brazil to celebrate with Rafaella once again.

This time we’re willing to accept that the injury was genuine, since the Brazilian suffered a broken foot at the end of February and wouldn’t feature again that season. With recovery at the forefront of his mind, Neymar went back to Brazil to try and recover in time for the 2018 World Cup in Russia but found some spare time to celebrate with his baby sister once again.

So the following year, Neymar once again broke his foot and missed a large chunk of the end of the season – including the dates around his sister’s birthday. It’s just a curse at this point, although he was able to return for the end of the campaign as PSG won the league title again, but lost on penalties in the Coupe de France final despite Neymar getting a goal and assist.

So last year wasn’t his fault in the slightest either, with the coronavirus taking over the world at the start of March. The season was curtailed early in France due to the virus, with the French league never restarting after it was paused following game week 27. Neymar returned back to Brazil to be with his family with football cancelled and that included his sister’s birthday – again.

That brings us to this season, where Neymar will miss a return to the Camp Nou with a groin/adductor muscle injury. The date of the press release from PSG states he will be out for four weeks, which directly coincides with the date of his sister’s birthday. With a quarantine period being implemented in Brazil and France for anyone travelling into or from the country, it will be interesting to see if the winger is seen with his sibling once again.

Coincidence or a well-thought out master plan from Neymar? Who knows, but you should never rely on the Brazilian to be available in the second week of March if history is anything to go by.

manchester united must prioritise a centre back signing this summer