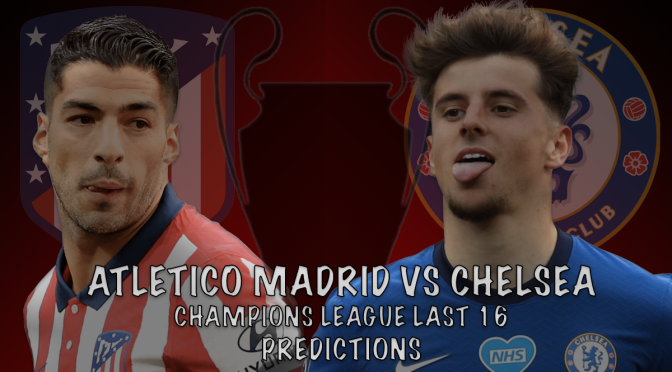 It’s Champions League time once again as the last 16 is back and the second round of fixtures commences.

Last week we saw the first eight teams compete, with some thrilling fixtures to take us through to the second leg and this week we’ll be hoping for more of the same – starting with La Liga leaders Atletico Madrid taking on the Premier League’s Chelsea.

Diego Simeone’s side currently sit at the head of the table, with a six point lead over closest rivals Real Madrid. Their recent form has seen them struggle massively though, with just two wins in their last five and this past weekend they suffered their first home defeat of the season courtesy of Levante.

Chelsea on the other hand have struggled this season and replaced manager Frank Lampard with Thomas Tuchel in January. Since his appointment the Blues had won five in a row and conceded just one goal prior to this weekend, before they were held to a 1-1 draw with Southampton.

Both teams have suffered with injuries and COVID-19 problems during the season so far. The west London side were without Kai Havertz and Callum Hudson-Odoi at different points of the season while Atletico’s breakout has seen them contend with the absence of the likes of Joao Felix, Yannick Carrasco, Thomas Lemar and Moussa Dembele.

Despite that though, it’s injuries that have hampered Simeone’s side in recent weeks. Defensively they are without Jose Maria Gimenez, Kieran Trippier (suspension), Sime Vrsaljko, Yannick Carrasco and Hector Herrera which has seen them become more open despite their switch to a 3-5-2 system this season.

The incredible form of Marcos Llorente further forward started at this stage of the competition last year when he scored against Liverpool at Anfield, but he is likely to be used as a wing-back in this game because of the injuries which softens them up going forward too. Luis Suarez has been clinical this season, but his lack of physicality owing to his age means he’s often in and out of games rather than bossing them like he was once able to.

Chelsea’s lack of cutting edge going forward could prove costly. There is arguably no better time to face Atletico than right now but with Tuchel’s side struggling to create clear-cut chances despite keeping the ball for the large majority of games, whether they can take advantage of Atleti’s problems is up for debate.

Both teams will line up with three at the back but Simeone’s side will be content to let Chelsea have the ball. They will rely extensively on the attacking output of Suarez and Felix, while Angel Correa’s pace could also be used to help on the counter attack.

It should be an intriguing tactical clash between two of the more meticulous managers in the game but considering one has been at their club for much longer and has implemented their ideas more I think this tie will go the Spanish side’s way.

Defensively we’ve seen the level they can reach, especially when motivated, and they will be keen to do what they can to win a maiden Champions League trophy this season. We still don’t know how good Chelsea can be going forward under Tuchel and that just means it’s hard to pick them in this tie.

The fact that Atletico’s home leg isn’t in Spain could work against them, but no fans means it’s less of a blow than it would normally be. Despite that, I expect a tight first leg that Atleti nick with a typical dogged display. The second leg will be more open but I think they should have some injured players back by then and at full strength they’re too much for the Blues and should progress.

psg brought back to reality with ligue 1 defeat to monaco