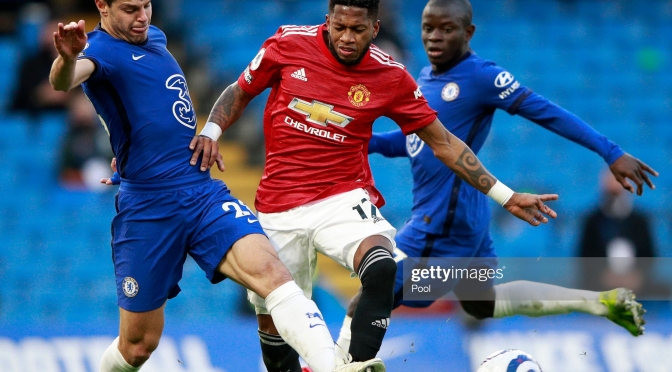 Another top six clash involving Manchester United and Chelsea ended goalless at Stamford Bridge on Sunday evening, meaning a double for the season.

The two sides met in a more open encounter than their December meeting which also ended 0-0, but neither side were able to find the key to break the deadlock and they shared the points.

Manchester United felt they should have had a penalty in the first half when the ball hit the hand of Callum Hudson-Odoi, although it would’ve been a harsh decision in my own personal opinion. Chelsea had a great chance in the second half through Hakim Ziyech but a strong arm from David De Gea denied him, while the Reds’ best chance came right at the end on a four-on-two counter attack only for Scott McTominay to mess up the final pass.

It was a game that was competitive throughout, with both teams having their own spells of control and dominance. Chelsea edged the possession for the most part, accumulating 57% over 90 minutes, but there was a real lack of quality from both sides in the final third.

Chelsea’s pairing for the game of Matteo Kovacic and Ngolo Kante showed great energy throughout and were defensively sound, but on the ball they really struggled to progress play. There was a lot of safe passing and it made it relatively easy for Scott McTominay and Fred to get into position and stop anything going in behind them.

The same could be said of United’s pair though, as they also struggled on the ball for the most part and kept it safe which made it easy for the Chelsea midfield to regain possession, knowing they had a spare centre-back in behind them too to fill the gaps.

With little quality in the middle third in terms of attacking, both sides struggled to create meaningful chances. Chelsea seemed at their brightest with Hudson-Odoi putting in early crosses across the goal for Olivier Giroud to attack but when he went off at half-time with an injury, the second half was pretty quiet for them.

United had a few shots from distance, with Fred going close and Marcus Rashford having a couple of efforts saved relatively comfortably but other than that Edouard Mendy was pretty comfortable throughout.

It was another sign from both teams that their current issues remain prevalent in the race for the top four. While Ole Gunnar Solskjaer’s men moved back into second place, they fell to 12 points behind Manchester City. It was their seventh game against one of the big six this season and continued a run of ZERO goals from open play in those games.

Their only goal came from the penalty spot against Tottenham in the 6-1 defeat at Old Trafford back in October, but since then they have also been able to keep five clean sheets with the only goal they conceded coming in the 1-0 defeat to Arsenal in November.

Chelsea’s issues are similar under Tuchel. They are yet to score more than twice in a game since he took over in January, but have conceded just twice in all competitions too.

It’s a result of both managers being more worried about not losing rather than taking the wins, deeming not being beaten as progress. Both managers declared their happiness at “being hard to beat” after the game and it shows that right now, that’s where these teams are.

They’re not quite ready to challenge for honours against the elite teams, but they are good enough to cause problems and ruffle feathers if they come up against those sides. Chelsea and United will face Liverpool and Manchester City respectively over the next week so don’t be shocked to see similar performances in those games too.

Maybe adding quality in the transfer market this summer will see a mentality change from the managers in the new season, or it could be the hangovers of the COVID-19 pandemic effects on the season.

There was nothing else expected from this game than a stalemate or a moment of magic to separate them and that says it all.