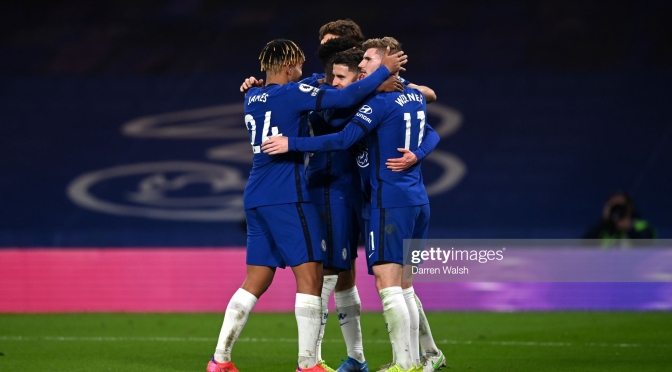 Chelsea made it 12 games unbeaten in all competitions and 11 since the arrival of Thomas Tuchel with a relatively comfortable win over Everton at Stamford Bridge.

The Londoners made it consecutive wins in the league to bounce back from their 1-1 draw with Southampton with a 2-0 win over the Toffees thanks to a Ben Godfrey own goal and a Jorginho penalty either side of half-time.

The win moves them into the top four, four points ahead of Everton and two points ahead of West Ham United having played a game more than both. You could say Tuchel is doing the job he was brought in to do, or the job that Lampard was supposed to do.

It was a performance that we’ve somewhat come to expect from Tuchel’s Chelsea, as they dominated possession and overloaded the wide areas to create chances while limiting Everton to half-chances and snap shots for the most part.

The impressive part of the performance was that the manager was able to rotate the side and still come away with a good performance and result. Kurt Zouma, Marcos Alonso, Jorginho and Kai Havertz all started the game in place of Antonio Rudiger, Ben Chilwell, Ngolo Kante and Mason Mount and the level of performance from the team didn’t really change.

It also showed a great versatility in the squad. Zouma came in as the left-sided centre-back as opposed to playing centrally as he did in his last appearance, while Havertz was fielded as a false nine with Timo Werner on the right wing and Callum Hudson-Odoi on the left.

It was a relatively free-flowing performance from the Blues as Alonso and Hudson-Odoi seemingly worked well together on the left hand side while Havertz seemed to thrive in a more central role with speed on either side of him, as opposed to the right wing role Lampard had him in a lot.

It was a positive display from him individually as he saw a goal taken off him and credited as an own goal before having another ruled out for offside, in what was arguably his best performance since his hat-trick against Barnsley in the Carabao Cup third round.

With a Premier League clash Leeds United coming up at the weekend before the Champions League last 16 second leg against Atletico Madrid in midweek, Chelsea will be very keen to ensure they can maintain this form going into the final stretch of the season.

The depth of the squad is on show, the manager has got them purring and the players that you would expect to be match winners or difference makers and starting to fill their boots. Things are looking up for the Blues.