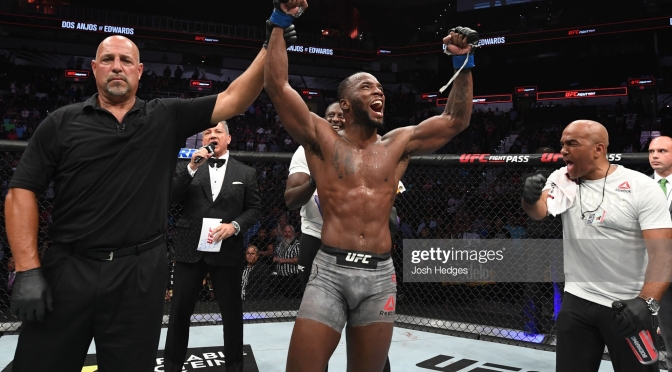 An eight fight win streak including a win against a former champion, it’s hard to understand why there isn’t more respect around Leon Edwards’ name in the UFC.

The Birmingham, England native hasn’t tasted defeat in the UFC since a loss to now welterweight champion Kamaru Usman back in 2015. Since then he has wins over Dominic Waters, Albert Tumenov, Vicente Luque, Bryan Barbarena, Peter Sobotta, Donald Cerrone, Gunnar Nelson and Rafael Dos Anjos to work his way back up the rankings and into the number three position in the rankings.

A whirlwind last 12 months means he didn’t get to fight in 2020, with the COVID-19 pandemic troubling him massively with travel restrictions and catching the virus itself, but he’s now set to step back into the cage for the first time since July 2019 to take on Belal Muhammad on short notice at UFC Vegas 21.

Muhammad is an odd opponent for someone on an eight-fight win streak and ranked at number three to be fighting. Not because he isn’t skilled in his own right, but because he broke into the rankings for the first time in his career just last month with a decision win over Dhiego Lima at UFC 258.

Edwards tried to fight a host of top talent who either flat-out refused to accept the call-out or just weren’t available. It means he was forced into a situation he tried to avoid last year by fighting fighters down the rankings as he pushes for a title shot.

Now he’s faced with a very durable fighter in front of him, who has excellent wrestling and a solid striking game to build upon. Edwards skill-wise is levels above Muhammad, but that isn’t always the be-all-and-end-all of a fight, especially at the elite level.

Muhammad will be incredibly keen to show he belongs in the upper echelons of the division and activity will be a huge factor in the fight too. Muhammad has fought, and won, three times since Edwards’ last fight and has been impressive in each bout – showing an improvement in his all-round game in each showing.

Despite all that, Edwards is expected to win the fight. He is the better of the two mixed martial artists and based on everything we’ve seen from them both in the octagon he is the better fighter. But winning isn’t enough.

Considering he is on the streak he’s on and already placed where he is in the rankings but is being overlooked by many in the title picture is telling. While he lost to Usman back in 2015, both fighters were completely different to how they are now and even back then Edwards took a round on two judge’s scorecards in a three-round fight.

Beating the number 15 ranked guy on short-notice isn’t going to tear up any trees for him. It’s a fight he’s supposed to win. It’s unlikely to earn him any new fans or make him a bigger drawer for the company, something that has been used against him, and it’s almost certainly not going to make the top guys who are already avoiding the fight suddenly change their tune.

He needs to do something to get their attention and the world’s attention. He’s most famous right now for getting punched in the face backstage by Jorge Masvidal, who used that night to propel himself into superstardom.

A highlight reel performance is necessary to show the disparity in levels between the fighters. It’s also needed to show the world that this is not a streak that means nothing, he has earned himself a top fighter as an opponent whether that be the title or not.

A dominant knockout, or a slick submission shows that he is capable of stopping the guys in the rankings and that is what sells fights and earns new fans. New fans mean more money, and more money means more opportunities. It’s not a coincidence that Usman is leaning on Masvidal’s popularity for a potential rematch to earn himself a big pay-cheque after already dominating against him.

For Edwards, the most important thing is that he’s back in the cage to show off his skills. But if he’s serious about going up a level and earning that elite status among fans, then just winning isn’t enough at UFC Vegas 21.