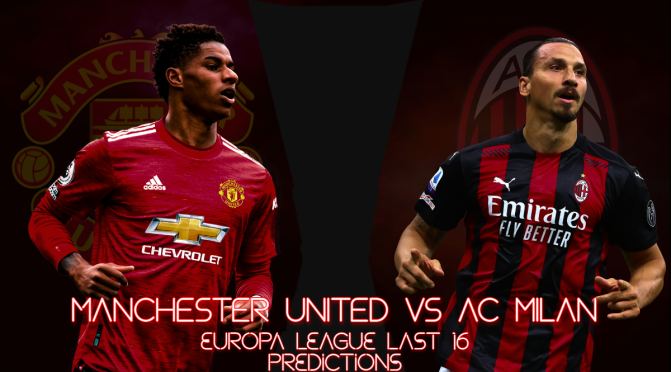 Two absolute giants of the game meet in a competition not befitting of their stature as Manchester United and AC Milan clash in the last 16 of the Europa League.

The Red Devils crashed out of the Champions League at the group stages after defeats in the final two group games against Paris Saint-Germain and RB Leipzig, before cruising through the round of 32 against Real Sociedad with a 4-0 away win in the first leg. A much relaxed second leg ended goalless as United controlled the tie from the off.

Milan on the other side came through the group stages as group winners, topping the table ahead of Lille, Celtic and Sparta Prague. They were paired up with Red Star Belgrade in the next round where they were held to draws home and away, but the three away goals they scored in comparison to Red Star’s were enough to see them progress.

Manchester United come into the tie in far from the greatest form, but having most recently snapped their rivals Man City’s 21-game winning streak with a 2-0 win at the Etihad. They’ve looked impeccable in the Europa League and their squad is more than strong enough to win the entire competition.

AC Milan on the other hand had started the season incredibly brightly domestically, but have recently fallen off and now find themselves in second place six points behind local rivals Inter in the title race. They’ve won just two of their last seven games in all competitions conceding ten goals and keeping just one clean sheet in that time.

It’s a welcomed return to the upper echelons of the table for the Milan side, who’ve seen their fortunes turned since the appointment of Stefano Pioli last season. Zlatan Ibrahimovic has continued to be excellent since returning, although he’s likely to miss the games against his former side with injury while the likes of Rafael Leao, Franck Kessie, Brahim Diaz and Theo Hernandez have all performed exceedingly well.

Both sides have used somewhat rotated sides in the competition so far, and depth is a strength that they both have but it’s hard to look at both squads and not think that United have the edge in this tie.

Ole Gunnar Solskjaer has opted for a somewhat stronger team for the the two games so far and it’s likely he’ll do something similar here. Marcus Rashford is likely to miss the first leg with an ankle problem, which means Bruno Fernandes is likely to carry the load for the side while he’s injured. That’s not ideal since United would likely rather rest him if they could, but he could hold the key to their progression.

Milan are a good pressing side that tend to take the majority of chances they create, while defensively they’re solid in the air and and very good at nicking the ball in the midfield. They are however prone to individual errors and their shape isn’t the most impressive which could allow a United side in the mood to create.

When the draw was made many people saw United crashing out of the competition, but generally I think people are more fearing of the name of the club rather than the actual team on the pitch.

At their best, Manchester United are the better team and over two legs the expectation is that they should be able to get the win and progress into the quarter-finals as the favourites to win the entire competition.