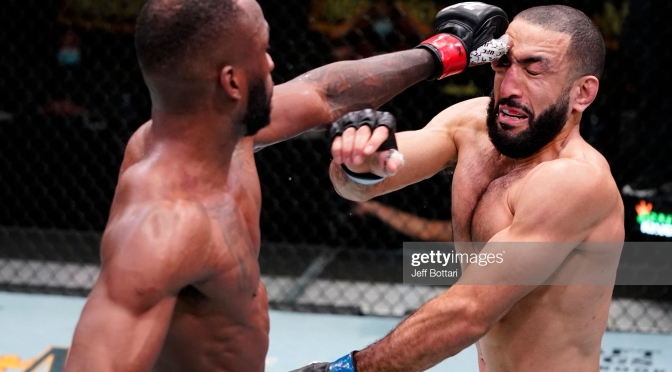 After 602 days away from the octagon, Leon Edwards finally returned to fight in the UFC at UFC Vegas 21 and yet we were left with more questions than answers after his main event with Belal Muhammad.

The 29-year-old Brummie started the fight well, rocking Muhammad with a head kick and his left-hand during the first round in a fight he was controlling. There were a few clinch exchanges where Muhammad was holding his own, landing a nice elbow on the break and showing good strength to swap positions on occasion too. There was also the warning – Edwards accidentally poked Muhammad in the eye and received a telling-off from referee Herb Dean.

In the second round, just 18 seconds in, Edwards went for a left-cross head kick combo. As he threw the cross and kick, he poked Muhammad in the eye once again. The Palestinian-American went down screaming with pain and then began crying in the octagon as the referee paused the fight, telling the ringside doctor he couldn’t see.

The referee immediately called off the fight, declaring it a no-contest. Many questioned as to why it wasn’t a disqualification in a similar way to Petr Yan’s foul against Aljamain Sterling at UFC 259 the week prior which caused him to lose his bantamweight title.

Due to the fight being in the second round and the referee correctly deeming the foul as unintentional, the rules state that a no contest was the right call.

Since the fight Muhammad has revealed on social media that there is no permanent damage to the eye and he will make a full recovery, calling out Edwards for a rematch in the process. But after the fight, Edwards told the post-fight media that he wasn’t interested in running it back.

“I’m on an eight fight win streak. That’s the third most in the promotion’s history. It’s me, [Kamaru] Usman and GSP (Georges St-Pierre). I feel like I’ve earned my way for a big fight.“

‘Rocky’ had been promised a title shot in his next fight with a ‘spectacular win’ by UFC president Dana White but that could now be up in the air. While his first round performance was good, he didn’t blow Muhammad out of the water and it certainly didn’t make his calls pre-fight for a shot at the title any more pertinent.

The question now is what do the UFC want to do? They could try once again to set up a bout between Edwards and Colby Covington, with a full camp for both fighters potentially being more appealing than the short-notice option.

This seems likely if, as expected, Kamaru Usman is to defend his welterweight title against Jorge Masvidal once again after a season of coaching on The Ultimate Fighter later this year.

Edwards admitted that if the fight between Usman and Masvidal happens, he doesn’t want to wait around for the title shot because of the amount of inactivity he’s had. That opens the door to Covington or a potential rematch with Muhammad should the UFC so wish it.

For what it’s worth, I don’t think a rematch is necessary. This was a fight put together purely out of circumstance because of other fights falling through and other opponents being unavailable or unwilling. While the ending of the bout was obviously unfortunate, there is no need for them to cross paths once again until they’re closer together in the rankings.

While the wait is over and Edwards finally got back in the octagon, his path going forward remains more hazy than ever before.

One thought on “UFC Vegas 21 Fallout: More questions than answers for Leon Edwards”