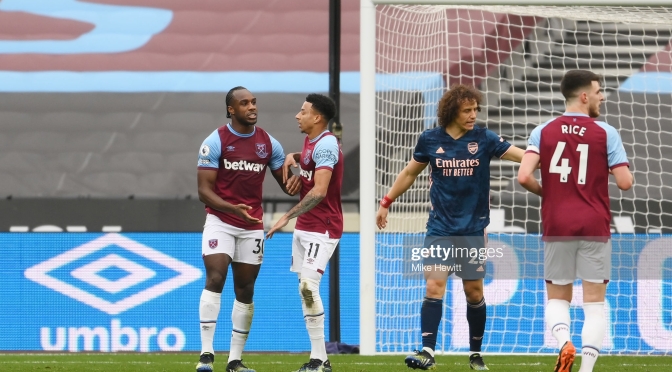 West Ham United turned in a Jekyll and Hyde performance at the London Stadium as they blew a 3-0 lead against Arsenal to take away only a point from the game.

Jesse Lingard scored a screamer early on with a half volley into the top corner, before a quickly taken free-kick allowed Jared Bowen to score just a minute later to double the lead. Michail Antonio’s header was then touched in by Thomas Soucek to give the Hammers a 3-0 lead inside half an hour, leaving Arsenal stunned.

The Gunners pulled one back before half-time as Alexandre Lacazette’s strike deflected in off Soucek, making the Czech midfielder a goalscorer for both teams in the same half. Mikel Arteta’s side came flying out in the second half and forced a second own goal, this time from Craig Dawson to make it 3-2 after a great run from Calum Chambers, before Nicolas Pepe’s cross found Lacazette to head home an equaliser late on.

It was a real performance of two halves from West Ham, who came out and dominated in the first half then seemed to go into their shells and quiver as a win got closer and Arsenal fought back.

Lingard and Antonio were willing runners throughout but their decision making in the second half suffered greatly, with both men seeming to opt for individual glory rather than keeping possession or playing their teammates in.

Declan Rice was excellent in the first half, keeping the play ticking over and putting a halt to the Arsenal attacks in the middle of the pitch but in the second half he was an almost entirely different player.

Martin Odegaard dropped a bit deeper to help the central midfielders and Rice and Soucek couldn’t cope. The Norwegian was able to completely dictate the game and it was because of him that Arsenal sustained attacks for almost the entirety of the half.

He was able to turn in the half-spaces, beat players and find passes through the lines or out to the full-back that had West Ham retreating and panicking. While he ended the game with no goals or assists, for my money he was the man of the match with an influential second half.

It was a performance that was very different from what we’ve seen from West Ham this season, in a year where they’ve been incredibly consistent in their style and performances.

They currently sit in fifth place in the table, two points behind fourth placed Chelsea after this result with nine games to play. Many have tipped them to potentially break into the Champions League places based on their performances this season, but it now seems unlikely.

This performance is the reason why many also tipped them to eventually fall away earlier than now, because the quality in the side just isn’t quite there.

Finishing among those in the race is still an achievement for Moyes’ side based on pre-season expectations, but it will be disappointing how a game in which they should have wrapped up and seen off turned into them being relatively happy to come away with a point.

The level of performance throughout the season has been great for them and players like Lingard, Antonio and Rice have rightly earned themselves plaudits – but the lack of top level quality in them and around them is showing as we enter the final stretch of the season.

is alan shearer the most underrated premier league player ever?