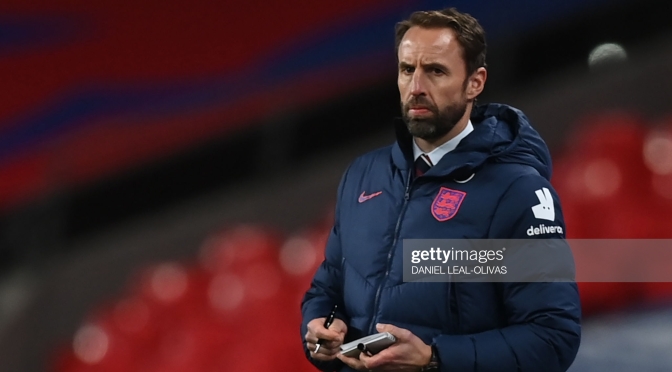 Forget this summer’s European Championships for a couple of weeks, England begin their path to the 2022 World Cup in Qatar with a triple header of qualifiers over the next two weeks.

Gareth Southgate’s side will prepare for games against San Marino, Albania and Poland starting against the minnows who come from just off the Italian coast.

Normally this would be where the manager would set out a strategy and start to plan how he wants to play, but considering everything right now there’s probably no need for England to do that this time.

They come up against a side in San Marino who have scored just once since 2017, with the aggregate score of their last 24 games standing at them losing 90-1 with 22 defeats.

You could say it’s an unfair match up against England who are currently ranked fourth in FIFA’s world rankings, 206 places above the bottom ranked San Marino. The result is probably not in doubt by anyone who knows anything about the sport and for that reason, there is no need for Southgate to use serious tactics or strategy for the game.

It may seem unprofessional or disrespectful, but it isn’t. In a game where England are expected to romp to victory against opposition who’s level will not be seen in a major tournament ever, the point of the tactical side becomes a bit forgotten.

England will likely have upwards of 70% possession of the ball, will create chance after chance and will barely be tested defensively – so why go with traditional tactics and formations. Why not go out to put a beating on them and set down a marker?

Belgium and Russia both beat San Marino 9-0, while even Scotland were able to score eight in their two games against San Marino. England should be looking to match the the former results at the very least with the type of attacking talent they have in the squad.

You don’t need four defenders on the pitch and you won’t need a defensive midfielder, so Southgate should make the most of his squad options and field an all-out attacking side to send a message and get some confidence flowing through his squad.

Either Dean Henderson or Nick Pope will start in goal but they’ll have nothing to do so it doesn’t really matter too much which one plays. In defence, you want your most progressive passers at centre back for a game like this so Harry Maguire and John Stones should be automatic picks. Kyle Walker’s pace and familiarity against a low block should see him start at right-back and that’s where traditional picks should stop.

Bukayo Saka broke into the Arsenal team as an attacking left-back but has now transformed into a winger and has been one of the Gunners’ best players this season. He should start on the left but will be given complete freedom to just roam down the flank.

In midfield you want the most progressive players that can make things happen and are comfortable technically. Central midfield is not England’s strongest position when it comes to players who naturally play there, but this is the type of game where that doesn’t matter too much.

The best, most technical players that perform centrally in the squad are Jude Bellingham, Mason Mount and Phil Foden and therefore those three should make up the midfield trio.

In attack, England’s best three are available and thus should start. Raheem Sterling and Harry Kane are locks in attack and with Jadon Sancho missing from the squad through injury, Marcus Rashford claims the left wing position. With that said he has been struggling with an ankle injury and has missed Manchester United’s last two games. If he is unavailable then Southgate should add goals to the team, and Dominic Calvert-Lewin should enter the frame.

The team still retains a balance but is packed with attacking players to get confidence flowing and to set out a marker for the rivals in the group. Use the other two games against Albania and Poland to work on tactics and formations, but this game should be a complete run-over.