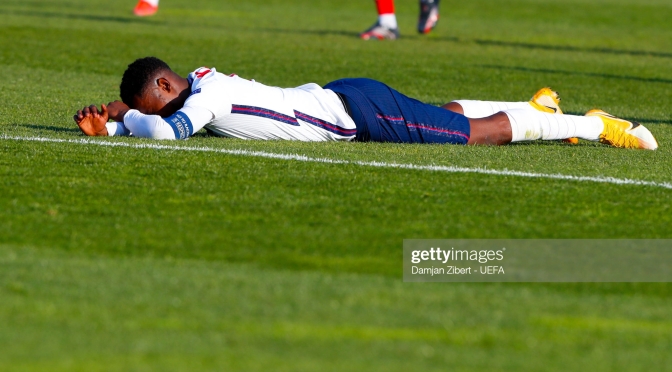 England Under-21’s started their European Championship campaign with a defeat to Switzerland, as their record in competition continued to go down the toilet.

Aidy Boothroyd’s side lined up with three-at-the back and two holding midfielders, then struggled to create any real clear-cut chances throughout the 90 minutes as Dan Ndoye scored a looping effort with 13 minutes to go to seal the three points.

It wasn’t a smash and grab though, as the Swiss missed a big chance in the first half and also hit the post in the second half before grabbing their goal. They were the better team on the day and fully deserved the win.

Now there is no disrespect intended in this post to the Swiss side. They’ve now won ten of their last 11 games stretching back to September 2019 and are clearly a very good team and well coached.

But their squad options are in no way equal to England’s and it begs the question as to why Boothroyd opted for the team he did. It makes it just two wins in the last eight tournament matches for England, following their early elimination in the tournament two years ago under Boothroyd.

Strangely enough, he was given a new contract after that failure but it now seems as though his limitations are clear for everyone to see.

The decision to go with three-at-the-back was incredibly peculiar, with the squad so clearly more suited for four with more attacking options. The decision to add two holding midfielders to that scenario when the likes of Eberechi Eze and Curtis Jones sitting on the bench while Tom Davies and Oliver Skipp started in the heart of the pitch and were largely tame.

When you have the better squad, better players and such quality attacking depth, playing with fear just makes such little sense.

You have the momentum of being unbeaten in six games and lots of players who are regulars at club level in top divisions across Europe. Why play with such fear and pragmatism?

The only possible explanation is that Boothroyd knows he isn’t capable of coaching his players to their maximum, because it exceeds his own personal abilities.

He is clearly only capable of coaching in a certain way and there isn’t anything wrong with that per say, but it means he should be in charge of a club or country that match those limitations.

England have got one of the best youth squads in world football and confining them to the limitations of a manager who cannot maximise their skills and abilities is only stifling the development of the players.

The manager of the Under-21 team is supposed to be the man to prepare the best young talent in the country for an eventual and potential senior team call up and to help them develop and learn about international football.

As a nation that are often regarded as one of the better teams in the world despite a lack of success at competition level, if England want to change that they need to start with appointing the right coaches. Aidy Boothroyd is clearly not the right coach for this team.

With fixtures against Portugal on Sunday and then Croatia in midweek, a tough group just got made a whole lot tougher with a lot more pressure on the squad following the defeat.

One thought on “How and why is Aidy Boothroyd still in charge of England’s future?”