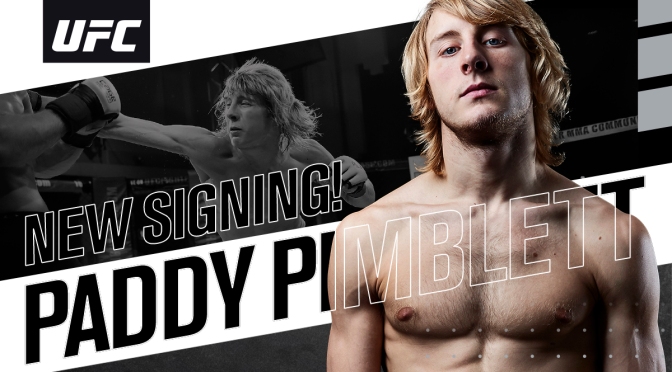 It was always going to happen eventually but it is finally official – Paddy ‘The Baddy’ Pimblett is a UFC fighter.

After yet another highlight reel finish at Cage Warriors 122, Pimblett finally accepted the UFC’s calls to join the number one organisation in the sport after making a plea to the camera to Dana White to get it done.

He’s a fighter the UFC have wanted for a long time now. An offer was previously made in 2016 when Paddy was just 21-years-old after he won the featherweight belt but Graham Boylan, the Cage Warriors owner, came up with a better financial package to keep hold of him.

Pimblett himself has also admitted he wasn’t ready at that time anyway and needed to gain more experience before making the step up and that’s certainly what has happened.

He’s gone from boy to man in the five years since and grown both physically and mentally. Having already gone through the lows of losing big fights and suffering a lengthy injury lay off, at just 26 he’s fully experienced the rollercoaster lifestyle of a professional MMA career.

Coming back from adversity to get two consecutive first round finishes has proved that Pimblett is ready for this new phase of his career.

The potential impact a UFC career can have on MMA in the UK is huge from ‘The Baddy’s point of view. He has a unique following like we haven’t seen before and has a fanatically, loyal young fan base. If you were to look into the crowd at some of the events he is part of, you’d be forgiven for thinking the WWE were in town.

Now that’s not meant as any disrespect by the way, it shows just how much of a hero this man is to the young MMA fan, especially in his hometown of Liverpool. Some have followed Paddy since his debut win in 2012 at just 17 years old on the same card as another UFC fighter, Darren Till.

The Echo arena is sold out in a flash whenever Pimblett has featured on a Cage Warriors card. He’s a big draw already and his stardom cannot be downplayed – no other fighter to never compete in the UFC bubble trends like Paddy does after a fight.

Liverpool is the home of MMA in England and is littered with gyms all over the city, but Pimblett has the potential to influence the next generation across the entire country and help to grow the sport and continue to prove its credibility. It’s the fastest growing sport in the world and the wave in the UK is about to get even bigger.

Pimblett has the character and charisma to potentially headline events for the UFC in the future. He can rock a microphone too, so expect him to say some outlandish things and bring some much needed energy to UFC press conferences again.

His walkouts are full of energy and with his trademark entrance music he gets a full arena hyped up and rocking before he enters the cage. He is a true showman and entertainer when it comes to everything outside the octagon.

Most importantly though, he has the ability to back his talk up. On the ground and in the grappling phases he his a dominant monster and it’s usually a wrap once a fight goes that way. Pimblett’s striking game has been his weakness but has gotten much better as his career has gone on and that will only continue to improve as he moves over to compete with the best of the best. Wrestling is the hardest part of the sport to learn, so he’s mastered the correct art first.

There’s potential for a Conor McGregor-like come up if Paddy finds his home in the UFC, although that is probably pushing it a little. The likelihood is that he’ll be eased into the featherweight division picture because of his marketability, but don’t be shocked to see him put straight into the fire on a main card.

With a contract signed and match-making decisions ready to be made, the possibility of Pimblett featuring on the expected Poirier vs McGregor 3 card at UFC 264 in July is mouth-watering and could see the UK rights holder BT Sport pull in their biggest pay-per-view figures ever.

You can make the argument that he is a bigger name and has a bigger following than 90% of the current UFC roster, so it would be surprising if we saw him used on any prelims. Paddy, like any successful and confident young man, has his haters. He’s a marmite character but any negativity is drowned out by his noisy supporters.

We’ve waited a long time for the inevitable to happen and see Pimblett in the octagon and the noise he will make doing so is going to expand the growth of MMA in the UK and Europe to new, higher heights.

He’s already achieved so much in his career but this is just the beginning of even greater things for Paddy Pimblett. The city of Liverpool are united in support of him but soon the entire UK will be talking about him.