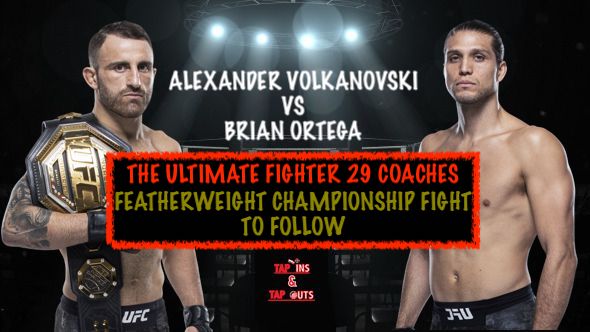 The Ultimate Fighter 29 coaches have been revealed, with featherweight champion Alexander Volkanovski and his challenger Brian Ortega agreeing to take the roles.

The reality TV competition in which the winner earns a UFC contract is due to make it’s return later this year, after the last season back in 2018.

The filming of the show was postponed due to the COVID-19 pandemic with filming schedules and coaches to be determined but it has all now been finalised with the UFC getting back to normal with full, sold-out capacity pay-per-view events.

After their scheduled featherweight title bout at UFC 260 was scrapped after the champion tested positive for COVID-19, the UFC moved to make the two high profile stars the coaches for the upcoming season with their rearranged bout coming at the end of the season.

Volkanovski is 22-1 professionally, with his only defeat coming in his fourth professional bout as a welterweight. He will be coming off back-to-back wins over Max Holloway where he won the title and then successfully defended it in controversial fashion on Fight Island at UFC 251.

Ortega on the other hand returned to action on Fight Island later last year with a dominant win over Korean Zombie after a near two year hiatus following a battering by Holloway in his previous title opportunity in 2018.

UFC president Dana White announced the selection of the two as coaches, with filming due to start later this month. The 29th edition of the show will feature fighters competing in both the bantamweight and middleweight divisions as they look to earn a contract with the organisation.

The last season featured heavyweights and women’s featherweights and was coached by Robert Whittaker and Kelvin Gastelum, although their initial fight fell apart on fight night when Whittaker was rushed into hospital for emergency surgery. The two will fighter later this month though, with Gastelum stepping in for Paulo Costa on short notice.

That season was won by Spanish heavyweight Juan Espino, who has since gone 1-0 with the organisation and Macy Chiasson who has gone 4-1 since winning the contract.

A date for the featherweight title fight has not been set yet, but the two will fight once the season comes to an end to finally settle the top of the division knowing that a rematch with Holloway likely awaits the winner.