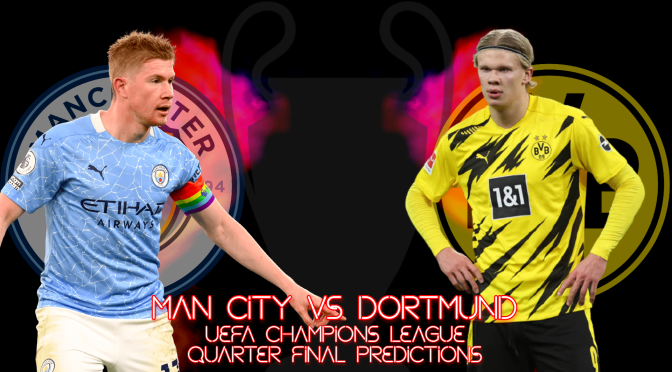 The UEFA Champions League is back with some absolutely mouth watering ties as we enter the quarter-final stage of the competition.

Two of the most exciting, attacking teams left in the competition will meet as Manchester City take on the Bundesliga’s Borussia Dortmund in the last eight knowing that they have a tough route to the final even if they’re able to progress through this round.

Pep Guardiola’s side were able to come through a reasonably comfortable encounter with Borussia Moenchengladbach, winning both home and away to come away with a routine 4-0 aggregate victory. Dortmund on the other hand were involved in one of the more entertaining fixtures of the last round, winning 3-2 at the Ramon Sanchez Pijuan before fumbling a 2-0 lead in their home leg to draw 2-2 on the night and progress 5-4 on aggregate.

In the Premier League, City look set to win their third league title in just four seasons after defeating Leicester City this past weekend. They now need just 11 points in the remaining eight games of the season to mathematically seal the title as they chase an unprecedented quadruple this season.

Dortmund on the other hand are struggling domestically, currently sitting seven points off the Champions League places after yet another defeat this past weekend to Eintracht Frankfurt.

It’s unlikely to get any easier for them now too, with Jadon Sancho likely to miss the first leg through injury and an away leg at the Etihad Stadium to come before their home tie. City have shown a fantastic defensive ability this season to shut their opponents out of games, keeping 28 clean sheets in all competitions this season including Ederson with 17 in the Premier League – no goalkeeper has kept more than the Brazilian.

Add to that that Guardiola’s side is also the highest scoring side in the Premier League, it’s a recipe for disaster for the German side. Edin Terzic is the man in charge following the dismissal of Lucien Favre earlier this year but he has been unable to really steady the ship. They have maintained their attacking impetus though, with Erling Haaland in particular shining as the top scorer in this season’s Champions League competition and behind only Andre Silva and Robert Lewandowski in the race for the Bundesliga golden boot.

City’s style of play has changed in a big way this season, with them not focusing so much on battering teams and more on control. They’re still possession heavy, as any Guardiola team is, but without a central number nine as their primary goalscorer they’ve seen more rotation and interchanging of positions and been able to share the load more.

Dortmund’s style is also similar to their traditions, with transitions a huge part of their attacking style. City are the masters of stopping the transitions in their tracks with the way they keep the ball and set up to stop counter attacks, and without being able to transition BVB will be in big trouble.

Defensively, Dortmund have struggled to keep teams quiet this season conceding 39 goals in the Bundesliga – more than anyone else in the top half of their league. Against City they’re going to be under the collar throughout, and stylistically there couldn’t be a worse team for them to come up against.

While you can never count Haaland out of being on the scoresheet or Dortmund from creating chances but I’m more than confident in my belief that City will put them to the sword and come away comfortable winners.