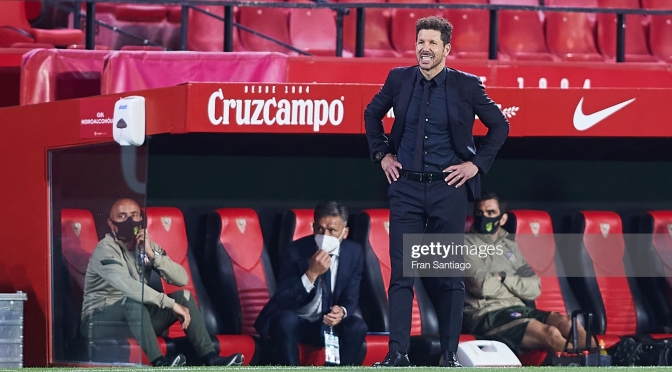 If this had been mentioned back in December, you would’ve been laughed out of the room but Diego Simeone’s time at Atletico Madrid could very well be coming to an end.

A two-time Champions League finalist, a La Liga title winner in the Lionel Messi/Cristiano Ronaldo era, a two-time Europa League winner and a Copa Del Rey winner – the Argentine has done it all.

Yet the way the current campaign has gone, it seems as though he has lost the magic touch he once had.

At one point in the season, Los Colchoneros found themselves with an 11 point lead at the top of La Liga. They had a big lead with games in hand and even managed to concede just ten goals in their first 20 league games of the season. They were dominant.

A switch to 3-5-2 in the middle of the campaign managed to get the best defensive performances out of his side that we’ve seen in a few years, almost a throwback to his great league winning sides. It also got a good attacking run from some of his forwards, with Luis Suarez hitting 19 league goals – an amount only bettered by Lionel Messi.

Yet by the end of match day 30, Atletico find themselves top by just one point with Real Madrid flying high and Barcelona still to face them before the end of the campaign.

They were one of the dark horses to win the Champions League when the draw was made too, supposed to be going against Frank Lampard’s drab Chelsea side while they were flying high. Instead, it was they who were drab and Thomas Tuchel’s Blues swept them aside with wins home and away and clean sheets in both games too.

Atletico Madrid have now won just four of their last 13 games in all competitions and don’t seem like they’re going to be turning their fortunes around any time soon. The most recent draw with Real Betis at the weekend was deemed a good result because of how badly they played, despite the fact they’d been displaced at the top of the table the night before when Real Madrid beat Barcelona in El Clasico.

They’ve lost their aggression in midfield, they look shaky at the back, they’re not clinical up front anymore and they’re missing the hunger from their entire team that has shaped the Simeone era.

The former defensive midfielder has made the team in the mirror image of what he was like as a player. Dogged, scrappy and with a win-at-all-costs mentality. It’s exactly what made them so feared in Europe under him in a two-legged affair and essentially turned a two-team league into a three-team league.

But now when you watch them, that’s all been drained out of them. He will no doubt go down as one of the best managers in their history but after a decade at the club it seems as though it’s best for all parties that it comes to an end now.

He is the highest paid manager in the world and has strongly considered stepping away before, but it seems now that the time might be right. He has tried to evolve his squad to a more attacking outfit to coincide with growing expectations, but it just hasn’t quite worked out for him.

The squad is set up for a coach to come in and try and u-turn the squad from defensive powerhouse into a potent attacking threat.

However this season turns out, whether Atleti are able to be crowned champions or not, it’s the right time for pastures new. Simeone can take some time off if he wants, but he’ll also be thrown job offers like they’re candy if he wants to get stuck into a new project immediately too.

Atletic can scour the market for a progressive coach to better suit their talented squad and start making waves towards a new direction. There’s nothing wrong with admitting that you’ve hit a ceiling under the current regime and need to make a change.

It seems as though that is what has happened here. The two have run the course together and it’s time now to part ways.

One thought on “Is Diego Simeone’s time at Atletico Madrid over?”