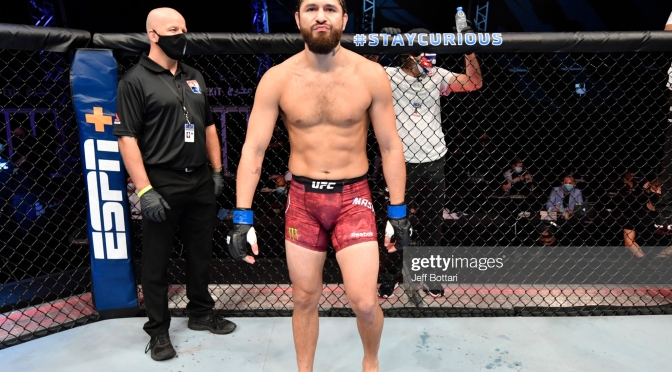 Stretch your mind back to July 2020 at the start of fight week leading up to UFC 251, as we prepared for Kamaru Usman’s second title defence against teammate Gilbert Burns.

At the height of the COVID-19 pandemic, the organisation made it’s plans to return clear on Fight Island and the welterweight championship was to headline it all. Despite many believing that Jorge Masvidal was the rightful number one contender, it wasn’t him getting the shot.

That was of course, until a week out from fight night when Burns tested positive for the virus and put the entire fight in jeopardy. Step forward ‘Gamebred’ – always ready to fight when required.

What followed was a 20lbs weight-cut in less than a week and then a very one-sided title fight as Usman successfully defended his crown in a five-round unanimous decision win.

The excuses for Masvidal were built in. Short-notice, no camp, a huge weight cut and lots of travel to get to Fight Island to begin with but his performance did little to convince anyone who watched it that it was possible to go any other way.

Usman was able to take him down at will for the most part, ate some of his best shots in the stand up and won almost every single clinch exchange. Masvidal didn’t have a chance once his big punches had no effect.

This time though, he is insisting on a change. He will have a full camp, no intense weight cut just before the fight and a game plan having already felt Usman in the cage and how he likes to take his opponents down.

The issue for him is that Usman also has those same advantages to build on from his victory the first time around.

Usman will have a chance to improve on his victory, having already promised that this time he will get the finish. He has spent several months training with Trevor Wittman now to improve his striking, as he showed with a fantastic display when he finally did fight Burns and knocked him out in the third round.

Masvidal will no doubt give it everything. While hit attention more recently has been directed towards big money fights, his goal has remained the same throughout – he wants the belt.

It took 48 fights in his professional career for him to earn a first title fight and it came under bad circumstances for him. Now in his 50th bout he can shake up the world and make his journey from backyard scraps to the top of the mountain a real one.

If he’s beaten once more though, it will mean that to many he is nothing more than a popular journeyman in the world of MMA.

50 fights, 15 defeats against opposition who are deemed anywhere between good and world class. His most notable win in terms of reputation is Nate Diaz, who is another fighter whose skillset doesn’t quite live up to the popularity he has garnered.

A win over Usman at UFC 261 in front of a capacity crowd not only puts him at the top of the welterweight world but it solidifies his legacy in the world of mixed martial arts. It puts a stamp on his career that means it was all worth something when people look back on it in five, ten, 15 or even 20 years time.

Were the fights in Kimbo Slice’s back yard supposed to be the start of something great that culminates in Jacksonville, Florida or was it just one of several viral moments that will eventually blow away with the wind.

It’s time for Masvidal to either fulfil his destiny or go down as a journeyman, but he’s got the boogeyman in his way.

ufc vegas 24 fallout: whittaker proves he’s the best of the rest at 185lbs