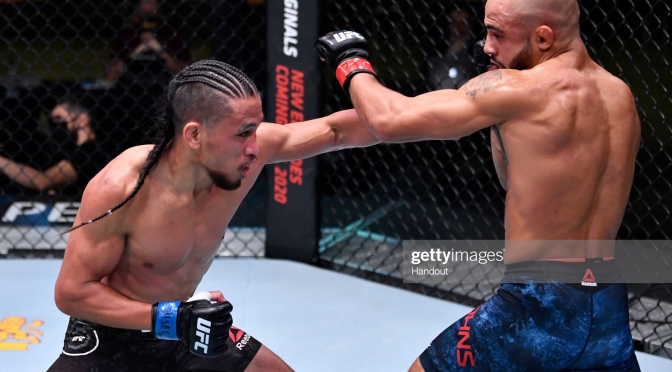 The UFC is back in front of a packed, sold-out arena for UFC 261 as Kamaru Usman defends his welterweight title against Jorge Masvidal for a second time in Jacksonville, Florida.

The two fought at UFC 251 on Fight Island last year with Usman earning a unanimous decision win, but this time with a full camp ‘Gamebred’ looks to fulfil his destiny rather than confirm his journeyman status as he goes for gold.

In the co-main events, Weili Zhang defends her strawweight title for the second time as she takes on former champion Rose Namajunas where a win would make her the most dominant 115lbs champion ever.

Valentina Shevchenko also takes on the biggest threat to her flyweight crown yet as Jessica Andrade looks to become the champion in just her second fight in the division.

With 13 fights on this card we’ll split the predictions into three, starting with the early prelims here.

An interesting strawweight fight to open the night as Liang Na makes her UFC debut against Ariane Carnelossi, who makes her first appearance in nearly two years. Carnelossi lost her UFC debut to Angela Hilla back in 2019, while Na is on a four-fight win streak coming into this bout.

Na is a fighter who immediately looks for takedowns, aims for top position and then starts working for submissions. This has got her in trouble though, as she tends to shoot from way out of range which has seen her give up positions and even be knocked out in the past. Carnelossi has some good striking, with good power in her hands and some decent accuracy to go with it. She isn’t the most volume heavy fighter but her takedown defence is good and that makes for an interesting match up.

Na is likely to keep to her usual game plan but Carnelossi should be prepared for it and has the mat skills and power to make her pay, so I think she takes the dub.
PICK – Ariane Carnelossi via Decision

A double dose of debut in the flyweight division as Dana White’s Contender Series contestant Jeffrey Molina takes on Aori Qileng. Qileng is on a six-fight win streak coming into this bout and won his most recent fight in January 2020 via second-round knockout, while Molina is on a seven-fight win streak.

Molina is a very good striker with excellent kicking in his arsenal, while Qileng is an unorthodox fighter to say the least. He has good wrestling and striking, but he tends to load his punches from the hip which should give Molina the time to read it and avoid any damage. It’s a really close fight on paper and just as close on the odds.

Overall, I think Molina is slightly better overall and I think he has fought the higher quality of opposition in the past so I think he’ll be able to land the more telling shots on the feet and edge a decision win.
PICK – Jeffrey Molina via Decision

A starlet makes his UFC debut in this one as 21-year-old Rong Zhu enters the organisation to take on Kazula Vargas looking to earn his maiden UFC victory. Vargas lost his first two UFC bouts to Alex Coelho and Brok Weaver, while Zhu has won his last ten fights in a row with nine of them being finishes.

Vargas is a wrestler with some decent boxing, similar to Kelvin Gastelum but his best chances of a win will always be on the ground. Zhu is a striker through and through, with great counter shots and excellent power in his hands. Zhu has great footwork and will look to keep a distance between the two and just pick Vargas off with punches and kicks.

This fight has a lot of similarities to the UFC Vegas 24 main event just at a lower level, so I’ll go with the counter-striker for a decision win once more.
PICK – Rong Zhu via Decision

A potential fight of the night contender between two bantamweight prospects in this one. Danaa lost his UFC debut to Heili Alateng before winning his last bout against Guido Cannetti at UFC 248 in March last year. Natividad made his UFC debut on just six days notice and got KO’d by Miles Johns at UFC Vegas 12.

Both guys are very well rounded, with good wrestling chops and heavy hands to match but their game plans usually differ slightly. Danaa prefers to throw hands and use the wrestling intermittently, while Natividad likes to shoot in for takedowns and use his striking to open those opportunities up for himself. It’s a fight that is likely to come down to durability and I think that edges in Danaa’s favour.

As it goes, I think Danaa will be able to defend a couple of takedowns and start landing his heavy hands up the middle to secure a stoppage win somewhere in the middle round.
PICK – Batgerel Danaa via Knockout, Round 2