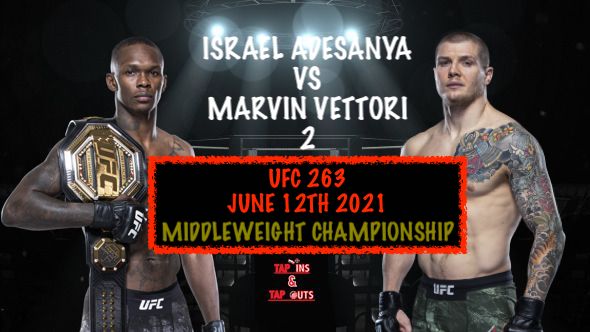 Israel Adesanya will return to the middleweight division this summer to defend his 185lbs title in a rematch against Marvin Vettori at UFC 263.

Adesanya suffered the first taste of defeat in his professional career last time out, moving up to light heavyweight to fight Jan Blachowicz in a bid to become a simultaneous champion. He found the step up too tough though as the legendary Polish power was able to stifle him and use his size to nullify him on the mat for a unanimous decision win.

Vettori has found himself on a five-fight win streak beating Karl Roberson via submission and then smashing through Jack Hermansson at UFC Vegas 16 and Kevin Holland at UFC Vegas 23 in unanimous decision wins most recently to put himself in the conversation for this bout.

The two will go head to head in a rematch from 2018, where Adesanya claimed victory in a split-decision bout that Vettori was grossly unhappy about.

The Italian protested the decision in the cage and hasn’t lost a fight since, while forever maintaining that he felt he won the first fight and is better than Adesanya. ‘The Last Stylebender’ would go on to beat Brad Tavares, Derek Brunson, Anderson Silva, Kelvin Gastelum, Robert Whittaker, Yoel Romero and Paulo Costa at UFC 253 after the first bout to be recognised as one of the best middleweights ever.

It was expected that Robert Whittaker would get the first rematch against Adesanya after defeating Darren Till on Fight Island, Jared Cannonier at UFC 254 and Gastelum at UFC Vegas 24 in convincing fashion and then called the Nigerian-born New Zealander out for a bout in September.

According to ESPN’s Ariel Helwani and UFC president Dana White, the organisation did offer Whittaker the fight first but the timings didn’t quite work out. Whittaker must quarantine for two weeks before he is able to go back to his family, and with the date being just eight weeks away he deemed it too short.

Adesanya was reportedly adamant about fighting in June to make amends for his March defeat at UFC 259 and thus Vettori was offered the fight instead. White has confirmed that Whittaker will get the next title shot as he is recognised as the number one contender and this would’ve been his fight had he been available.

UFC 263 already has another title fight scheduled for the card, with flyweight champion Deiveson Figueiredo defending his title against Brandon Moreno in a rematch from their draw in December at UFC 256 in what was one of the best fights of the year.

Figueiredo had some injuries that he needed to heal up after making a three-week turnaround for that fight, but both fighters are now ready to go and will co-headline the card in a double header.