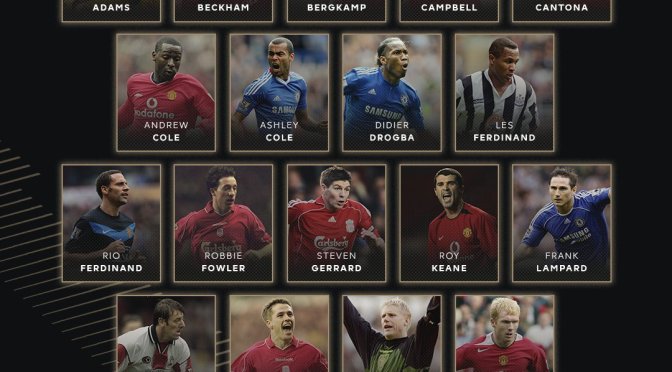 The Premier League has formally announced a hall of fame for 2021 and the first two inductees are absolutely no shock to anyone.

Premier League all-time top goalscorer Alan Shearer and legendary Arsenal striker Thierry Henry were announced as the first men to enter the new hall of fame, along with a list of other nominees who could potentially enter after a fan vote.

23 other players have been made available to be inducted off the back of those votes, with each person able to vote for six of the 23. With criteria including a retirement date before August 2020, some players such as Wayne Rooney are ineligible but the options are still phenomenal.

The 23 players eligible to vote for are as follows:

In no particular order and taking a look at the full list of players, here’s my picks for who should join them.

It’s not often that the Premier League had a player who spent the vast majority of their career in the league and was one of the best ever in his position. That is something that Ashley Cole can claim for himself though.

The former Arsenal and Chelsea man was part of the ‘Invincibles’ that went unbeaten over an entire season and then won another title with the Blues as part of Carlo Ancelotti’s record breaking side. He was always one of the most reliable defenders in the division defensively, while making 385 appearances in the competition. For me the best full-back in Premier League history, he is a sure-fire pick to get in the hall of fame.

Another Cole up for nomination who deserves his flowers is Andrew, the former Newcastle, Manchester United, Blackburn, Manchester City, Fulham, Portsmouth and Sunderland striker.

Cole rose to prominence for the Magpies, scoring 43 goals in 58 Premier League appearances before a British record £6m + Keith Gillespie move to Old Trafford. He would go on to be a lethal number nine for Sir Alex Ferguson’s men, scoring 93 times in 195 Premier League games for the Red Devils.

He won five league titles with the Reds before leaving and when it was all said and done he finished up with 187 Premier League goals. That currently sits him behind on Alan Shearer and Wayne Rooney in the all-time charts, but what makes it even more special is that he never scored any of those goals from the penalty spot. Such a stunning record with such phenomenal success in the competition, he deserves his spot among the elite in the hall of fame.

It’s pretty hard to do a hall of fame and not have a huge influx of Manchester United players considering their leading 13 titles in the competition.

A huge part of that success was the midfield pairing of Roy Keane and Paul Scholes through the nineties and early 00’s, where together they won six Premier League titles. From the moment Scholes came through as part of the Class of 92, United were able to maintain their dominance in the competition and he became one of the most successful players to ever play in it.

Keane was successful before Scholes though, winning the title in 1993/94 alongside Paul Ince too and was then runner-up the year Blackburn shocked the world. The Irish international is regarded as the best captain in the league’s history and was also named in the PFA team of the century as well as the PFA team of the year five times.

Scholes won 11 titles during his time in the league and was included in two PFA team of the years too and scored over 100 league goals. Together they formed the best midfield pairing in the competition’s history but individually their successes stand out more than most and they both deserve their name to be enshrined among the greatest Premier League players ever.

That leaves two places and there’s no way that Frank Lampard can miss out. The former West Ham, Chelsea and Man City midfielder is the highest scoring midfielder in Premier League history and one of only two players to have more than 100 goals and assists.

Lampard broke into the Premier League scene after coming through the West Ham academy under his uncle Harry Redknapp’s tutelage. After initially struggling with the pace and physicality of the league he impressed enough to attract the attention of Claudio Ranieri across London and would go on to become a cornerstone of the Blues during the Roman Abramovich era.

The final spot has to be between two of Lampard’s former teammates, Rio Ferdinand and John Terry. Two of the best central defenders in the world in their prime and two of the best in Premier League history, it’s hard to pick between the two.

For me though, one had more success and was the better defender of the two and therefore it’s Ferdinand who gets the nod. The former West Ham and Leeds defender won six league titles and was in six PFA team of the year’s during his Premier League career. Terry won five titles and was in the PFA team of the year four times, so there isn’t much between it in terms of honours but on the pitch the eye test is always the more telling way to separate players.

Ferdinand was able to play in a low-block, a high line or whatever is between the two. He had the pace to go one-on-one with any attacker in world football but also had the added quality on the ball that any top defender needs to have in a top team.

Terry was always at his best with less space behind him due to a lack of pace, which was criminally exposed during his short time playing under Andre Villas-Boas. He was able to play at the higher level for longer that Ferdinand, considering he struggled at QPR and Terry won the title in his final season despite not being a regular in the team any more.

It could go either way, and I may be biased, but Ferdinand for me was the best centre half England have ever produced and therefore deserves his flowers to be among the first inductions into the hall of fame.

One thought on “My Premier League Hall of Fame inductees”