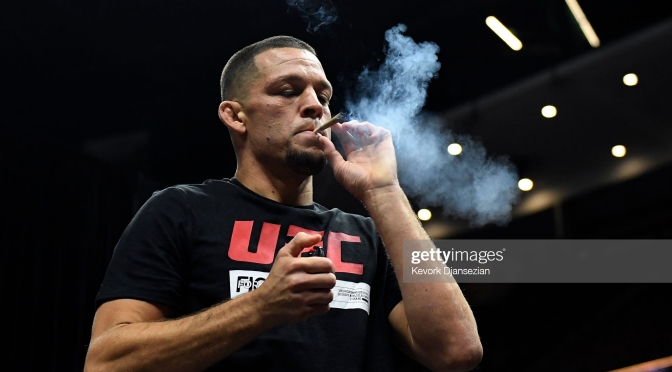 History will have to wait an extra month to be made in the UFC as the welterweight bout between Leon Edwards and Nate Diaz has been postponed.

The first ever five-round, non-title, co-main event was scheduled for UFC 262 later this month to serve under the vacant lightweight title fight between Charles Oliveira and Michael Chandler.

However it has now been moved to June 12th at UFC 263, meaning we’ll have to wait for this banger of a fight.

According to ESPN‘s information, Diaz suffered a minor injury in training and rather than scrap the bout it has simply been moved to the following month’s pay-per-view event.

The injury is undisclosed but is said to be minor enough for the bout to not be in doubt at all and both fighters were happy to move it along.

Diaz will be fighting for the first time since his BMF title fight against Jorge Masvidal in 2019, where he was beaten when the doctor stopped the fight after the third round due to a cut above his eye. Prior to that he had returned to the octagon following a three-year absence after a defeat to Conor McGregor by beating Anthony Pettis at UFC 241 via unanimous decision.

Edwards on the other hand is on an nine-fight unbeaten run, having not lost since a defeat to the current champion Kamaru Usman way back in 2015.

‘Rocky’ had beaten Vicente Luque, Bryan Barbarena, Donald Cerrone, Gunnar Nelson and Rafael Dos Anjos before he saw three bouts with Khamzat Chimaev scrapped due to complications with COVID-19 on both sides.

He then took a short-notice fight with Belal Muhammad at UFC Vegas 21 in March to end a near two-year absence from the cage, only to see the fight end in the second round due to an accidental eye poke and declared a no contest.

It’s believed that Diaz specifically asked for a fight with Edwards, with both men believing a win over the other should shoot them into title contention against Usman in the near future.

The fight will still be a five-round, non-title co-main event but will now serve behind two title fights at UFC 263 from Glendale, Arizona on June 12th.

Israel Adesanya will defend his middleweight championship in a rematch against Marvin Vettori in the same building where their first fight took place back in 2018, while Deiveson Figueiredo and Brandon Moreno will meet in a rematch of their own for the flyweight title too.

Figueiredo and Moreno completed a remarkable three-week turnaround at the back end of 2020 to compete for the title at UFC 256, with the bout declared a draw after ‘Deus de Guerra’ was deducted a point for a low blow.

UFC 262 will continue with the one title fight, while Tony Ferguson vs Beneil Dariush will now serve as the co-main event.