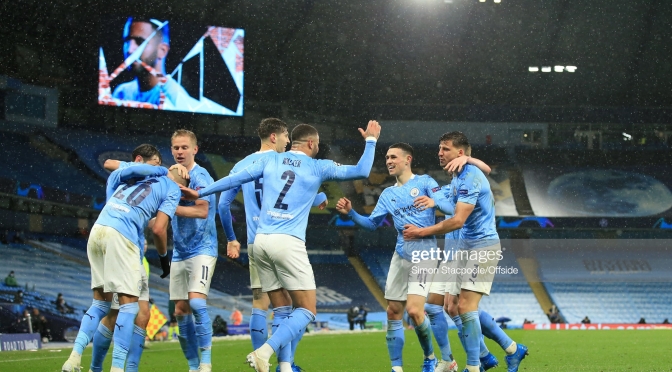 Manchester City cruised into their first ever Champions League final with a dominant display as they swept PSG aside 2-0 on the night and 4-1 on aggregate at the Etihad.

PSG started the night fast, but Ederson’s long pass in behind the defence found Oleksandr Zinchenko who cut the ball back for Kevin De Bruyne. The Belgian’s shot was deflected int the path of Riyad Mahrez, who slotted through the legs of both Presnel Kimpembe and Keylor Navas to give the hosts the lead.

City were absolutely monstrous in defence throughout the game and with just under half an hour to go, they countered the Ligue 1 champions and Foden squared the ball to Mahrez who smashed into the roof of the empty net and secured their route to Istanbul.

It was an outrageous display of composure, skill, quality and game management from Pep Guardiola’s side as they showed a maturity beyond their experience at this level.

They set up with a more defensive outlook to protect their first leg lead, using no natural striker once again but with a rotating front line to leave PSG nobody to mark.

Ruben Dias was at his absolute best, channeling his inner John Terry with some tremendous blocks with his head and chest and winning all his individual battles whenever he needed too. Alongside him, John Stones was imperious once again while Kyle Walker completely shut down PSG’s counter-attacking threat with his phenomenal pace.

It was a performance that they should be incredibly proud of, but it was a result that cements their status as the best team in Europe this season.

Defensively they were impenetrable for the most part but as usual when they were going forward they looked threatening no matter how they decided to attack.

Out wide they were able to isolate the full backs and win their one on one battles, while in midfield they kept possession but were also aggressive in the tackles and brilliant when pressing. It was a truly complete performance.

They will go into the final as favourites regardless of whether they face off against Chelsea or Real Madrid and deservedly so.

A record breaking eight wins in a row and 11 wins in the competition show that they have been the best team in the tournament throughout, and conceding just four goals in 12 games shows that it’s not just been about blowing teams out of the water going forward too.

Their excellent squad depth has obviously helped immensely with the crazy schedule, but Guardiola’s management has been exceptional and he has got the team playing at arguably their highest level since his arrival at the club.

It will be Guardiola’s first Champions League final since 2011 when his Barcelona side beat Manchester United for the second time in three years, and will be a chance for him to put to bed the myth that he can’t win the tournament without Lionel Messi.

Europe’s best, England’s best and arguably the world’s best, Manchester City are here to stay at the top of the mountain. This could be the start of a sky blue era on the continent.