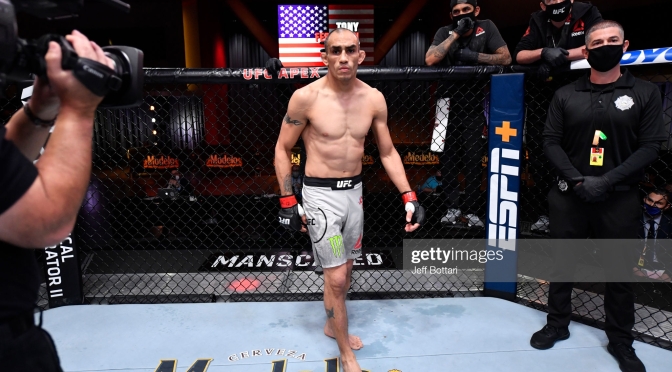 It’s rare that when you have two big names going head to head in the UFC that there is a crossroads at stake for both guys, but that will be the case in the UFC 262 co-main event this weekend.

Tony Ferguson spend several years as the man in the lightweight division that nobody wanted to face, but after back-to-back dominant defeats in his most recent fights he has got people questioning whether or not he still has it.

On the other side of the cage from him this Saturday night will be the highly impressive Beneil Dariush, who has made a name for himself as the 155lbs dark horse with a string of excellent performances and a six-fight win streak.

Ferguson is in desperate need of a win in this fight. After a record 12 fight win streak at 155lbs, ‘El Cucuy’ was essentially an uncrowned champion in many people’s eyes. He’d beaten everyone in his path and a fight with Khabib Nurmagomedov fell through an insane five times meaning he never got a shot at the undisputed title during his career to date.

But he did get a second shot at an interim title against Justin Gaethje last year in the first event to take place during the pandemic for the UFC.

It was a bad night for him as he was knocked out in the fifth round after being brutalised for the entire fight beforehand. Gaethje however was considered one of the absolute best in the world, who enjoys chaos just as much as Ferguson does.

The loss wasn’t looked at so badly, but the performance against Charles Oliveira at UFC 256 was a shadow of the Ferguson we’d all grown to know and love.

Part of the mystery around the fight that never happened with Khabib was Ferguson’s brilliant ground game that went along with his craziness on the feet. But Oliveira came in, went toe-to-toe in the striking exchanges and completely dominated him on the ground.

In his last 40-odd minutes of cage time, Ferguson has lost the aura of invincibility that he once had.

In steps Dariush now, who has found an aura of his own recently. A six-fight win streak including four finishes, the Iranian has been seen as a man who can make a push up the rankings and potentially challenge for the title.

But this fight is without a doubt the biggest of his career and there is more pressure on him now than ever before. His previous biggest win in his career was arguably his submission win over Drew Dober back in 2019, but Dober isn’t even ranked.

A win over Ferguson will show that he is finally ready to make the step up to the elite, because there are no easy fights after that. A defeat though would set him back and surely have fans question whether he can actually do it at the highest level.

He’s previously been beaten by Michael Chiesa and Edson Barboza, two who have failed to make it at the highest level themselves thus far in their careers, so it’s a barrier he must pass.

For Ferguson, a loss essentially ends his hopes at ever becoming the world champion. Three in a row against fighters of arguably diminishing quality and reputation each time would likely end his career at the top. Dariush needs the win to prove he’s worthy of the reputation he has received and can step up to fill Ferguson’s position in the division.

It’s a crossroads for both guys and a win has never been more important for either guy and all roads lead to chaos at UFC 262.