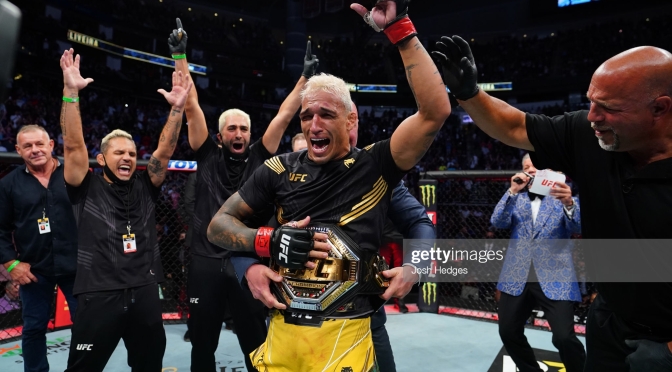 It’s the beginning of a new era at 155lbs as Charles Oliveira defeat Michael Chandler at UFC 262 to become the 11th undisputed lightweight champion.

It was a rocky start for the Brazilian, as ‘Iron’ Mike was able to close the distance quickly and effectively using his right cross to the body before going upstairs with a couple of hard shots. Those punches took their toll on Oliveira who ended the first round on his back eating big punches, thankful for the buzzer.

Chandler came out rather excited in the second round but his world came crumbling down around him as just 19 seconds later the referee was waving the bout off in ‘Do Bronx’s favour.

The commentary team had spent the entire build up to the fight talking about how Oliveira threw all his strikes with perfect technique and in straight lines, and it was on full display in the finish of this fight.

The 31-year old slipped a barrage of strikes from Chandler, who clearly wanted to take advantage of the fact he’d hurt Oliveira in the round previous, and landed a stunning left hook right on the button to put his opponent down.

He moved in for the kill immediately, landing punches, a knee and an elbow before Chandler tried to create space by moving away. But Oliveira refused to allow him that breathing room and chased him around the cage, before landing another big left hand that put his lights out.

The scenes following the referee’s stoppage were something to behold, as Oliveira climbed the cage and went straight to the commentary table to tell them “surprise, surprise!” – mocking what Chandler had told the world after he stopped Dan Hooker in his debut at UFC 257.

He then proceeded to run around the stadium celebration, embracing fans and coaches before returning to the cage to show the utmost respect to Chandler and his team.

It was the 28th fight of his illustrious UFC career, making him the man with the most fights in the promotion before winning the belt. But it couldn’t have come at a better time for him. He’s in his fighting prime at just 31-years-old and seems to have accumulated the knowledge and IQ from his previous fights to pick and choose his moments well.

He has the most finishes in UFC history now with 17, as well as the most submission wins in the companies history with 14, which begs the question of just who can beat him right now. Whoever does eventually take the belt from him will have to be something special, because Oliveira is far from a one-trick pony.

In the co-main event we saw a brilliant performance from another lightweight in Beneil Dariush as he completely dominated Tony Ferguson for 15 minutes to claim a place in the top five of the 155lbs rankings.

Many thought that Ferguson would come out all guns blazing after back-to-back defeats to Justin Gaethje and Oliveira, but Dariush closed the distance well and used his superior grappling to tremendous effect to take next to no damage in the fight and get a routine win in the end.

While Dariush was incredibly impressive, it was a sad sight to see for Ferguson as it looks like the wild techniques and awkwardness that once made him great are now the exact reason he can’t get anything going.

His basic fundamentals are lacking and in an era where the average level of the UFC fighter has increased, coinciding with father time tapping ‘El Cucuy’ on the shoulder, it may now be time to call it a day.

His run at the top of the division was incredible and the fact he never got to challenge for the undisputed title will always burn him, but rather than go out even sadder he should just admit his time at the top is over and walk away.

Ferguson’s fights are notorious for being absolute wars and he has taken so much damage over his career, not to mention we don’t know the damage caused long-term by the heel hook he refused to tap out to during the UFC 262 card.

There’s no shame in admitting that you’re just not that guy anymore and saving yourself for another day and that’s exactly what I hope he does.